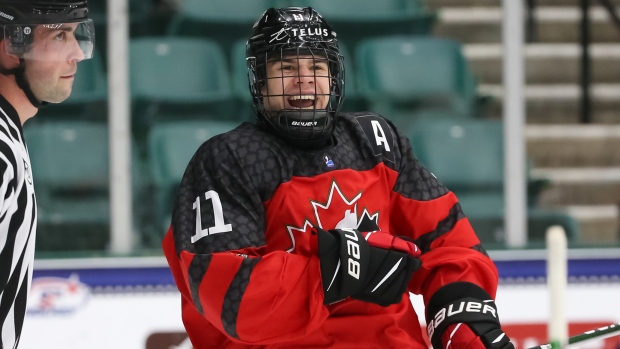 After sitting as a healthy scratch on Boxing Day, Logan Stankoven will make his World Juniors debut on Tuesday.

"Just pure excitement," the Kamloops Blazers sparkplug said. "I've dreamt of this moment for many years. It's a family tradition for me to watch the World Juniors growing up, so to now be a part of it and finally take my first step on the ice and play in a game, it's pretty special."

With Justin Sourdif suspended one game and Xavier Bourgault sidelined with an undisclosed injury, Canada is down to 12 forwards, which has created an opportunity for Stankoven.

What did the 18-year-old notice while watching Canada's 6-3 win over Czechia?

"It looked really fast, and a big part of my game is playing fast and attacking the defenders quickly, so I'm going to try and use that to my advantage," Stankoven said. "I thought there were parts of the game where it was pretty physical, so you have to be ready for that as well. I have fresh legs. I'm going to be ready to go tonight."

Stankoven, who has 32 points in 22 games this season, is getting thrust into a prominent spot alongside Kent Johnson and Mason McTavish.

"Logan's been a dynamic player in the Western Hockey League all year long, so we don't think that line's going to miss a beat," said Team Canada assistant coach Michael Dyck, who is the head coach of the Vancouver Giants.

Stankoven skated with McTavish during the first three practices of training camp. The Peterborough Petes centre described the 5-foot-8 Kamloops native as a "little bowling ball" who is hard to handle in corners.

"That's a pretty good description of how I play," Stankoven said with a smile. "I'm not the biggest guy but I'm not afraid to go into the dirty areas and corners and battle and it's a big part of why I've made it so far despite being a smaller guy. I'm looking forward to creating chemistry as we did at the U18s."

With Sourdif eligible to return on Wednesday, the forward lines will get rejigged again soon. Stankoven realizes this is a small window to make an impression.

"I'm going to do everything in my power to make sure that I can stay on that line and hopefully create some space for those guys."

McTavish is pretty good at creating space on his own. He showed that on the opening goal Sunday night.

"That was a pretty unreal sequence," said Stankoven. "It shows how dominant he is on the ice. It really shows why he played in the NHL this year with how strong he is out there and how well he protects the puck. Watching the replay, he made it look so easy."

McTavish got a nine-game audition with Anaheim to start the season.

"It was a pretty sweet goal, but I'm not too surprised," said Ducks defenceman Jamie Drysdale. "He's a heck of a player. He's a legitimate man."

What makes him a "legitimate man"?

"The fact that he's 215 pounds helps," Drysdale said with a chuckle. "That definitely helps. He's really good at using his size and protecting the puck and then you add the hands he's got. He showcased it pretty well Sunday night. He was attacking triangles out there and just had some sweet moves. He got rewarded on one of them with a really nice goal. Pretty fun to watch him out there."

Drysdale is still eligible to play at the World Juniors but has other plans this year. He's logging 20 minutes a night in the National Hockey League. The Toronto native won gold in Ostrava in 2020 before settling for silver last year inside the Edmonton bubble. He will be keeping a close eye on this year's event.

Drysdale likes what he's seeing so far from two of the returning players, including defenceman Kaiden Guhle.

"He was a wrecking ball out there," Drysdale said with a smile. "Just seeing him throw his weight around, and connecting on a few big hits, that's a real big energy boost for the team. Being on the bench and seeing someone like that, your captain, throwing hits like that and doing what he can to help, it's a real energy boost."

"It opens ice up when he's physical like that," the reigning Quebec Major Junior Hockey League defenceman of the year said. "It's always nice to have that physical asset. He's been a great partner for me so far. We complement each other."

The Guhle-Cormier pairing is the only one that has stayed together since the start of training camp.

With two forwards out, Canada is expected to dress all eight of their defencemen tonight, which means Soo Greyhound Ryan O'Rourke will make his World Junior debut after being a healthy scratch on Sunday.

Up front, left winger Cole Perfetti picked up three assists in the 6-3 win over Czechia.

"His backhand pass to [Donovan] Sebrango was pretty sweet," Drysdale said. "I was watching it with my dad, and we were really impressed with that play. Not many guys can make that backhand sauce play through a seam and see that late guy coming in. It was a heck of a play. It's also the simple things like putting it in Big O's wheelhouse for the one-timer goal."

In the moments leading up to that Owen Power power-play goal, Perfetti seemed to be directing the big blueliner to get into the ideal spot.

"He's a really smart player," Power said. "He finds guys all over the ice. He's someone that's really easy to play with and is always putting you in good spots and giving you good pucks to score on or make another play."

"He's someone that always makes the right play," said linemate Shane Wright, "always thinking one step ahead, two steps ahead of everyone else."

Dylan Guenther started Canada's training camp on the top line with Wright and Perfetti before being dropped to the fourth line after only a few practices. On Boxing Day, the Arizona Coyotes prospect, who was picked ninth overall in July, found himself as the 13th forward. He played a team-low three minutes and two seconds.

"A big emphasis for me is my play away from the puck," Guenther said. "That's something [coach] Dave [Cameron] told me I need to work on and need to get better at if I want to play minutes. So, my focus today is playing away from the puck and playing a hard game and using my skill within the team structure."

Guenther took reps in Sourdif's spot on the third line alongside Jake Neighbours and Ridly Greig at yesterday's practice. Guenther and Neighbours also play together on the Edmonton Oil Kings.

"Our strengths are different and complement each other," Guenther said. "Jake is a power forward with a lot of skill who can make plays and score goals. He's such a good passer and I've got a good shot. He's good below the goal lines and in creating space for himself and me too."

Dyck told TSN this morning that there's also a chance Will Cuylle will get time on the third line tonight. So, Guenther may end up on the fourth line with Elliot Desnoyers and Connor Bedard.

Austria last played Canada at the 1981 World Juniors. The countries haven't faced off since. Captain Marco Kasper describes Tuesday's game as an "awesome" opportunity for his underdog crew.

"To play against Canada in Canada, it's going to be special," Kasper said. "We know it will be a really tough game. We have to play and don't hide. Get our legs moving and play a hard game."

"We are a team that believes we can play real good hockey," said Kasper, who plays for Rogle in the Swedish Hockey League. "We know it will be tough, but I still feel like the team believes we can challenge even good teams."

Whatever happens this week in Edmonton, Austria will be back at the 2023 World Juniors in Russia. With COVID concerns growing greater by the day, the IIHF decided there will be no relegation round this year.

"It's awesome to play in the World Juniors," Kasper said. "Next year will be a third year in a row and, even without relegation [rounds], it's an honour for us."

Kasper, on a personal level, has a lot on the line here. He is among the top draft-eligible players in Edmonton and can impress scouts on the big stage.

"He's such an explosive guy," Kasper said. "He's so versatile. He can shoot. He can dangle you. He's such a good skater. And, also, he's a gritty player, which I really like about him."

Under-18 players must wear full facial protection in International Hockey. Kasper wears a cage. However, the 17-year-old goes with a white cage, which is rarer than the black ones sported by Wright and others.

"It looked fine with the white jerseys," he said with a grin. "Let's see what it looks like today with the red ... Some guys chirp me but that's normal. We can chirp also the bubble and the black cage. It's fine getting some chirps."