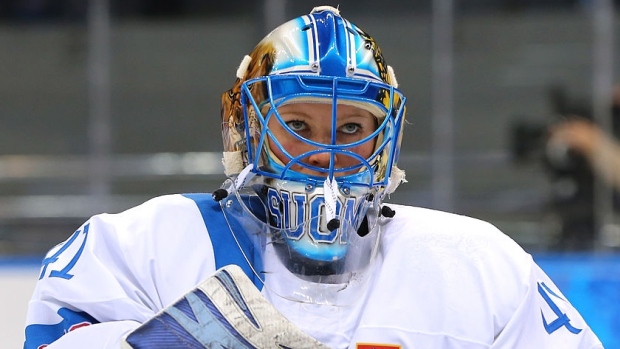 Räty is currently recovering from a knee injury she suffered while playing for the Shenzhen KRS Vanke Rays in Russia’s WHL. But she says that while playing in the Women’s Worlds remains a possibility, she has concerns outside of her rehab.

“The bigger problem for me is COVID,” she told TSN.

This year’s women’s world hockey championship is set to begin on May 6 in Halifax and Truro, N.S. Räty is currently in Moscow with the Vanke Rays, but she resides in Minnesota with her fiancé, and she explained the difficulty surrounding the logistics of travel.

“Then there’s a travel ban [to the United States]. Unless that law changes, I’d have to go somewhere for two weeks outside of the U.S. before I could enter because I’m not a green card holder and I’m not married yet. I have a fiancé in the U.S. Just travel logistics-wise, we’ve been talking with coaches – I don’t know if it makes sense… But I guess we’ll cross that bridge when my season’s done here in Russia.”

Räty has been arguably the best goaltender in women’s hockey for many years. She helped lead her country to an upset win over Canada in the semifinals of the 2019 world championship, making 43 saves and frustrating the Canadian attack.

She followed that up with a 50-save performance against the Americans in the final, but the United States would go on to claim gold, albeit in controversial fashion, winning 2-1 in a shootout.

Räty said she hasn’t been a part of Finland’s camps for almost a year. The team held training throughout last summer and most recently in November, but Räty did not attend because she was unable to leave Minnesota. Finland had camps planned for both last December and last month, but they had to be cancelled due to COVID concerns.

The Finnish goalie has been rehabbing her left knee injury since last month, when she sustained an ACL strain, an 80 per cent MCL tear, and a meniscus tear during a WHL game.

“Because the ACL was clean, they decided no surgery, because MCL you can always rehab,” she explained.

Räty said she was initially told her recovery could take up to a year, but she has been able to speed up the timeline.

“My rehab was way faster than expected – not a medical miracle, but usually the recovery shouldn’t happen that fast,” she said.

She returned to Finland briefly to continue rehab before re-joining her Shenzhen teammates in Moscow for the final of the WHL playoffs. The games between the Vanke Rays and Agidel were meant to take place this weekend but have been postponed to a later date due to a positive COVID-19 test.

Räty said she’s definitely not yet at 100 per cent but she has been able to skate.

“So I came back and joined my team, not expecting to play but at least I’m here, able to finish the season,” she said.