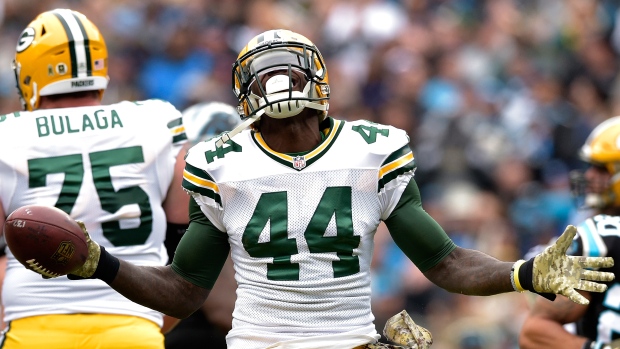 GREEN BAY, Wis. - The Packers have tabbed James Starks as their top running back, replacing the slumping Eddie Lacy.

Coach Mike McCarthy said before practice on Wednesday that Starks is the team's "No. 1 back right now" entering this weekend's game against Detroit.

McCarthy says the team will continue to use both backs. Starks typically received chunks of playing time when he came off the bench.

Lacy was an 1,100-yard rusher in each of his first two seasons in the league. But he has tailed off this year with just 308 yards rushing on 83 carries in eight games. Lacy sprained an ankle in Week 2 and left Sunday's loss at Carolina with a groin injury.

McCarthy said that he thought Lacy would participate fully in practice.

Lacy ran for 10 yards on five carries against Carolina's tough defence, while Starks had 39 yards rushing on 10 attempts.

But Starks also made an impact in the passing game with six receptions for 83 yards and a 29-yard touchdown in the fourth quarter.

"He's earned that opportunity," McCarthy said. "I'm not a big believer in just riding one running back the whole season. We'll stay with the one-two punch."

Starks for the year has 334 yards rushing on 78 carries, but his 41.8 yard-per-game average is still three yards more productive than Lacy's average. Asked about blocking, McCarthy voiced confidence in his offensive line, but said that it needed improve both up front and in the secondary level.

"It's not just one guy. If it's just one guy, we would've made an adjustment or a change already," McCarthy said.