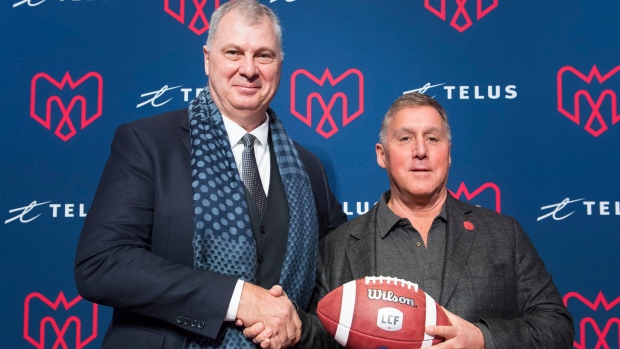 Two entrepreneurs from the steel industry are the new owners of the CFL’s Montreal Alouettes.

Sid Spiegel is the founder and chairman of the board of Southern Ontario-based Crawford Steel. Gary Stern is the company’s chief executive officer.

“It’s amazing for us to be part of the Alouettes, a storied franchise that has meant so much to the people of Montreal and Quebec, and so much to the game we have followed all our lives,” Spiegel said in a league release.

“We see this not only as a challenge, but also as something that can be a lot of fun. We want Alouette fans to know we share their desire to see this team win on and off the field,” Stern said in the release.

“We commit to them and our players, coaches and front office that we will do everything in our power to ensure this team succeeds. Our goal is to make Montreal and Quebec proud.”

Their previous investments in Quebec include steel plants in Longueuil and Rouyn-Noranda, and real estate holdings.

The sale of the Alouettes brings to a close months of searching for new owners by the league, which took over the franchise from Bob and Andrew Wetenhall last May. The league negotiated with several potential owners of the team over the course of the season, repeatedly stating it expected a sale to close before the end of the season.

“These gentlemen emerged with the best offer in hand and the best interests of the Alouettes and their fans at heart," CFL commissioner Randy Ambrosie said. "They have a genuine passion for football in Montreal and the resolve and resources to make the team successful over the long term.”

Under the league’s guidance, with interim head coach Khari Jones and general manager Joe Mack, the Alouettes reached the playoffs for the first time in five seasons.

Team president Patrick Boivin was dismissed late last week. A search for a new general manager, which was put on hold before Christmas until new ownership could be settled, will resume quickly.

“Our first priority is putting in place a new General Manager and a new President who can make the right football and business decisions,” said Stern, who will serve as the Alouettes’ lead Governor on the CFL Board of Governors.

“We do tremendous business in Quebec and we have great respect for the province. We want to build this organization the way we have built our businesses: by putting good people in place and supporting them as they do their jobs, while working with great partners and understanding the market.”

The Alouettes were re-born in 1996 with the relocation of the league’s Baltimore franchise. They had been owned by the Wetenhall family since 1997.