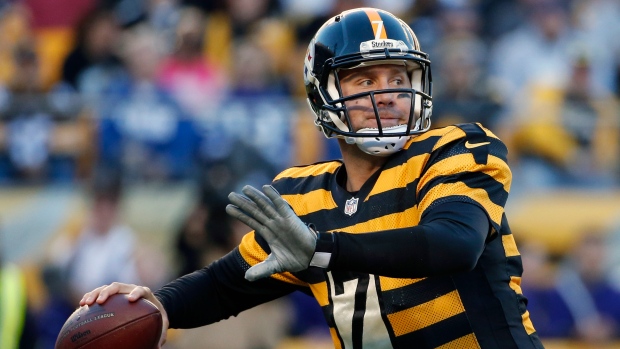 Nothing has been made official, but Steelers coach Mike Tomlin said the two-time Super Bowl winner, who missed four games with a sprained knee and bruised leg, was "close" to starting the team's 23-13 loss at Kansas City.

"In the end, we decided to go with the guys that had the practice reps," Tomlin said after Sunday's game. "That was the appropriate thing to do. No second-guessing there, we'll move forward with Ben as we prepare for this week."

Tomlin said he felt good about Roethlisberger's availability against Cincinnati, but cautioned that the Steelers' franchise quarterback still has to go through a week of practice.

"I don't know what the reaction to next week's work is going to mean to him," Tomlin said. "So I say that with the understanding that how his knee reacts to the work we give him could play into it."

That provides optimism enough for the Steelers, who look forward to the possibility of getting back their leader.

"It would be a huge boost for us, not just offensively, but from a morale standpoint for the team," linebacker Arthur Moats said. "You know the type of talent he brings and what he's capable of doing. I feel like when he's healthy and ready to go he's going to be out there."

Roethlisberger, who has missed 21 games in 11-plus seasons, suffered his injury in the third quarter of a September win at St. Louis. The Steelers were third best in the NFL at nearly 300 yards passing per game with Roethlisberger under centre. Without him, the Steelers averaged close to 200 yards passing, third worst in the league.

But they managed to make it four games so far without Roethlisberger as 35-year-old Mike Vick and third-year pro Landry Jones navigated the Steelers to a 2-2 record.

Jones, in relief of the injured Vick, sparked the Steelers to a come-from-behind victory two weeks ago against Arizona. That was enough for Jones to earn his first career at Kansas City. He had his team in position to win, trailing by a field goal in the fourth quarter, but the Steelers were unable to overcome three turnovers. Jones completed 16 passes for 209 yards with a touchdown and two interceptions.

"I felt largely that he gave us a chance," Tomlin said of Jones' performance.

Roethlisberger would face a rested Cincinnati team coming off a bye week. And the Steelers, who trail Cincinnati by two games in the division, realize it won't be an easy task even if Roethlisberger returns under centre.

"It will be one of those things where we let Ben be Ben," guard Ramon Foster said. "We can't act like it's a grand celebration. He is going to be a guy who just does his job. We know how he operates. You miss the guy when he is out, and when he is back we will roll."