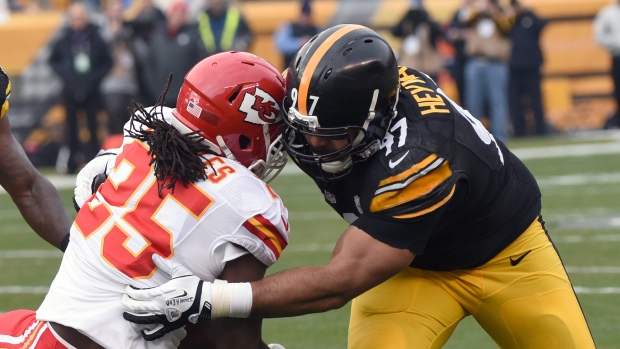 PITTSBURGH, Pa. - Cam Heyward spent the off-season swatting away questions about his future as the final year of his rookie deal with the Pittsburgh Steelers loomed this fall.

No matter how he was asked, the defensive end always gave a variation of the same answer: "I'm good."

And now on the eve of training camp, he's paid.

Heyward agreed to a new six-year contract Thursday worth nearly $60 million that will keep him in Pittsburgh through 2020. The 26-year-old posted a picture of him signing the deal on Twitter with the caption "I love this organization." He later tweeted "never know how much it means 2 stay a Steeler."

The Steelers are at the end of a youth movement on a defence that is trying to reinvent itself. Heyward is a key part of the process. He set a career-high in 2014 and tied for the team lead with 7.5 sacks as the Steelers won the AFC North title. Pittsburgh did it, however, in spite of a defence that slipped to 18th in yards allowed and 27th against the pass thanks in part to a pass rush that struggled to generate consistent pressure.

Heyward's future never really was in doubt. The Steelers exercised their fifth-year option on his rookie deal last spring and nailing him down long-term became a priority once quarterback Ben Roethlisberger agreed to a contract extension in March.

The son of former NFL running back Craig Heyward — who played in college at Pittsburgh — grew up with a special affinity for the Steelers. He understands better than most how the team embraces continuity. As the leading edge of the next wave, Heyward has taken second-year end Stephon Tuitt under his wing in much the same way Keisel, Casey Hampton and Aaron Smith did for him.

"'He definitely is next in line," Tuitt said during minicamp in June. "We all look up to him to become better."

And now Tuitt will have plenty of time to do it. Heyward joins a core that includes Roethlisberger, centre Maurkice Pouncey and wide receiver Antonio Brown, all of whom are signed through at least the 2017 season as Pittsburgh tries to get back to its status as one of the NFL's elite franchises. Last season's late surge to a playoff berth was a start, but not the finish.

"I think a lot of younger guys took a lot of big steps this year," Heyward said after a wild-card loss to Baltimore in January. "We have to continue to make steps if we want to make the ultimate goal."

That step included making sure Heyward stuck around. The powerful 6-foot-5, 280-pound Heyward steadily improved during each of his first four seasons, becoming one of the few consistent producers on a defence that struggled at times getting to the quarterback. Pittsburgh finished 26th in the league with just 33 sacks, a number Heyward expects to rise in 2015.

"If I can become a double-digit sack guy or just take up a lot of attention so other guys get pressure, that's fine," he said. "The front seven has to dominate and we all have to be a part of it. We have to be interchangeable."

Maybe, though Thursday's signing makes Heyward an integral part of a group hoping to rediscover its tenacity in 2015 and beyond.