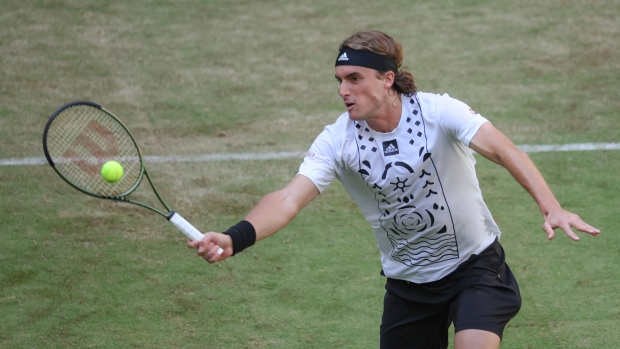 HALLE, Germany (AP) — The second-seeded Stefanos Tsitsipas defeated Benjamin Bonzi 7-6 (1), 1-6, 6-3 in the first round of the Halle Open on Tuesday, when there were also wins for Felix Auger-Aliassime and Nick Kyrgios.

Tsitsipas, who reached the quarterfinals in Stuttgart last week before a surprise loss to Andy Murray, had to fight hard to beat the 52nd-ranked Bonzi in 1 hour, 55 minutes to take his tour-leading tally to 36 wins in 2022.

Tsitsipas is bidding for his second title of the year and his first on grass. The Greek player next faces Kyrgios, the Australian wild card entry who defeated Daniel Altmaier 6-3, 7-5.

Kyrgios was playing for the first time since he complained of facing racist abuse from the crowd in a loss to Murray last week in the Stuttgart semifinals.