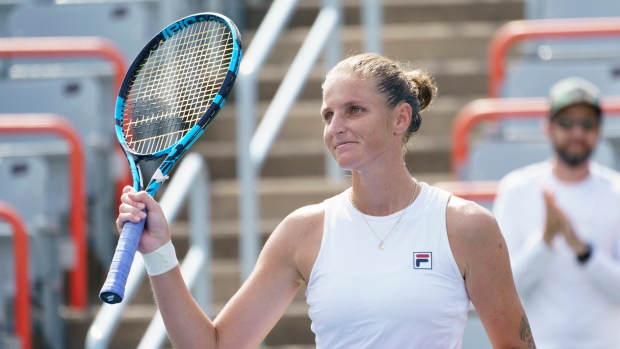 There'll be some familiar matchups at the final day of the National Bank Open Sunday.

No. 1-seed Daniil Medvedev will take on American qualifier Reilly Opelka in the men's tournament in Toronto, while Karolina Pliskova of the Czech Republic faces Italy's Camila Giorgi on the women's side in Montreal.

Both duos have met before.

Medvedev, the world No. 2, has faced Opelka four times on the ATP Tour, with each match going to three sets. The Russian has won three of the contests, including the last meeting in the round of 32 at this year's French Open.

Medvedev secured his spot in the final with a 6-2, 6-2 win over American John Isner in the semifinal. The 25-year-old hit 11 aces and won 4-of-7 break points in the speedy 54-minute match.

"I need to be honest — I think something was bothering him," he told reporters after the match. "I knew that I need to do the match from my side. I felt like I could return so that's what I was trying to do in the rally, I was just trying to keep pressure on him all the time.

"I was serving pretty big also, so I'm just happy with my level of the game and happy with the result, that's for sure."

Medvedev reached the final at the tournament in 2019, when the event was known as the Rogers Cup. He lost in straight sets to Rafael Nadal.

The Russian said he's worked hard over the past two years to get better.

"I don't want to say that I've become a 10-times better tennis player, playing better forehand or backhand," he said. "If you try to stay on the same place, you're going to regress. I heard it from many champions and from many people in life, business people or whatever.

Opelka upset No. 3-seed Stefanos Tsitsipas of Greece in a marathon two-hour, 32-minute match to collect a spot in Sunday's match.

“I really was clutch with not only my serve but my volleys in the big moments," he said

Midway through the 54-minute-long first set, the American hit a no-look, backwards shot between his legs from well below the baseline, only to see Tsitsipas return it across the court, just out of his reach.

“That was my only option from there," Opelka said with a grin. "It’s kind of somewhat a highlight but tweeners are so common now, I always say they’re so mainstream, they’re not even cool anymore because everyone hits them.”

The first tiebreak saw the Greek go up 2-1 when Opelka, ranked 32nd in the world, came up to the net and sent a shot well out of bounds. The momentum seemed to swing, then, with Tsitsipas ultimately taking the tiebreak on an ace.

It was more of the same in the second set, with the six-foot-11 Opelka’s serve reaching speeds of up to 227 kilometres per hour, but Tsitsipas continued to adapt and respond.

The American went up 6-4 in the second tiebreak when Tsitsipas double faulted. Tsitsipas repeatedly threw his racket in frustration as Opelka finally took the tiebreak. He received a warning for racket abuse.

There were no signs of frustration, though, coming into the third set. Again, the duo each held fast to their serve and attempted to force their opponent into a misstep.

Tsitsipas got his first chance at a break point midway through the third set. Opelka responded with a massive serve that broke a string and forced him to switch rackets. The new tool provided him no trouble, as he got the point back with a quick drop shot and eventually took the game to knot the set at 3-3.

A pair of double faults saw Tsitsipas face a break point in the next game. He sailed a return high and wide, giving Opelka the first break of the match.

The Greek then took a ball out of his pocket and smashed it into the stands in frustration, and was handed a point penalty in response.

"I think he felt that I was serving well, I was earning points in a lot of different ways on my serve," Opelka said. "Maybe it was just a fluke game, but I like to think it was pressure that I put on him with holding so easily the whole match.”

Opelka sealed the victory with one last blast of a serve that Tsitsipas simply couldn't corral.

“It was played on the details and he prevailed," Tsitsipas said of the loss. "It just didn’t go my way when it had to. And it’s alright. I feel like there’s hope for next time.”

At the women’s tournament in Montreal, Pliskova calmly clinched her spot in the final with a 6-3, 6-4 win over the top-seeded Aryna Sabalenka of Belarus on Saturday.

She celebrated her first-set win with a muted fist pump, and when Sabalenka broke her in the second set, the No. 4 seed from the Czech Republic didn't show any signs of being flustered.

"I’m quite calm. Of course I have some nerves and emotions but I try not to show it that much," the 29-year-old said.

"There is a lot of things happening on the court but I think the main thing is just to have a goal and follow that goal."

Sabalenka struggled with consistency throughout the match, registering five double faults and saving just 4-of-7 break points. She threw her racket to the ground in frustration early in the second set.

Meanwhile, Pliskova remained collected, and used her strong serve to keep her out of trouble. In the second set, the world No. 6 saved a break point with an ace, then preserved the hold with two other serves that Sabalenka simply couldn't control.

“I think I was super solid today," she said. "Just did everything I was supposed to do to win this match.”

Giorgi, ranked 71st in the world, downed American qualifier Jessica Pegula 6-3, 3-6, 6-1 in the second semifinal on Saturday, hitting four aces and saving 7-of-10 break points en route to the victory.

Pliskova and Giorgi previously met at the Tokyo Olympics, where Giorgi took a straight-sets win in the round of 16.

The lone Canadian left in this year's National Bank Open is Ottawa's Gabriela Dabrowski who, alongside doubles partner Luisa Stefani of Brazil, punched a ticket to the final with a 6-2, 6-3 win over Russian Veronika Kudermetova and Elena Rybakina of Kazakhstan in semifinal action.

On Sunday, they'll face Croatia's Darija Jurak and Andreja Klepac of Slovenia. The two teams met in the final of the Silicon Valley Classic, where Jurak and Klepac won 6-1, 7-5.