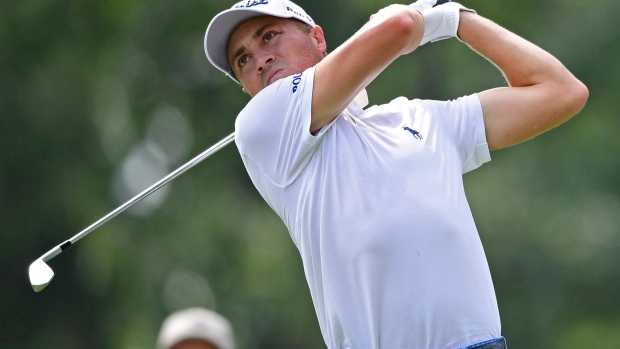 NASSAU, Bahamas — Justin Thomas and Henrik Stenson have different caddies at the Hero World Challenge. Only one of them is temporary.

Stenson said while caddie Gareth Lord is recovery from shoulder surgery, the two are taking a break. The Swede has hired Scott Vail for the Bahamas, and he plans to start the new year with him and see how it goes. Vail previously worked for Brandt Snedeker.

Thomas gave Jimmy Johnson the week off from this holiday tournament and is using Cory Whitsett, a former teammate at Alabama.

Whitsett said Thomas asked him about it a few weeks ago, and the only conflict would have been had Whitsett made it to the final stage of Web.com Tour qualifying next week. He missed out on the second stage, and "here I am."

More than having a friend on the bag, Thomas is hopeful it can inspire Whitsett, who has been toiling on the mini-tours. Whitsett and Thomas were Walker Cup teammates in 2013, and both qualified for the U.S. Open at Pinehurst No. 2 in 2014.

"I can't imagine how hard that it is going through Q-school and missing a few times," Thomas said. "I'm sure a few doubts come into your head. I think he knows, and I want him to know, that he belongs out here, he's good enough. Being out here with us, watching us playing, being around the best in the world is going to be good for him. I hope it makes him realize that he's a lot closer than he thinks he is.

"I know he's good enough to play out here," Thomas said. "I'm hoping he can somehow get confidence out of this week."

Whitsett has only caddied once before, when he was living at Sea Island and caddied for fellow Texan Cody Gribble at a Monday qualifier. This was different. No sooner did he arrive at Albany that they headed to chipping area where Tiger Woods, the tournament host, was working.

Whitsett had never met Woods. He will see plenty of Woods on Thursday when Thomas is paired with him in the opening round.