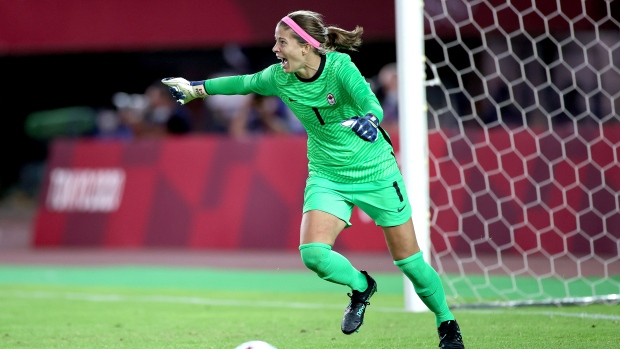 Canada’s women’s soccer team once again delivered on the Olympic stage, putting themselves in position to play for a medal in Tokyo by beating Brazil 4-3 on penalties Friday after the two sides remained in a 0-0 deadlock through extra time.

“Really, really proud of the resilient performance the group put in. They went right to the very end,” head coach Bev Priestman said.

“The emotions are high right now, but what a performance by the team,” said Labbé. “Defensively, we were solid against some of the best strikers in the world… That’s what the Olympics are about – these tight games that bring out performances that make us really proud. I’m so proud of the team in front of me today.”

The Canadians will now face the United States in the semifinal on Monday, as the team aims for a third straight podium finish after earning back-to-back bronze medals.

As is usually the case between Canada and Brazil, not much separated the two sides, ranked eighth and seventh in the world, respectively. It was a cagey affair for 120 minutes, with chances at both ends but zeros remaining on the scoresheet.

Heading into the match, the Canadians’ all-time record against their South American rivals was 8-8-9, with Canada winless in its last four matches versus Brazil.

Labbé continued her MVP-level performance this tournament. She has shown her resiliency multiple times during these Olympics, and Friday was no exception. There were moments when it looked like she may need to leave the game due to injury, but she remained on the field and came up with two huge saves during penalties.

“For me, to be able to do my part in helping this team come away with a win is a really proud moment for me as well,” said Labbé.

She had already taken a knock in the first game of the tournament, when she was called for a foul in the area after a collision with Japanese forward Mina Tanaka. She later had to be subbed out of the game, but not before denying Tanaka on the ensuing penalty.

The Canadian goalkeeper sat out for the second match versus Chile before returning for the group stage finale against Great Britain.

Labbé once again was involved in several big collisions during Friday’s game against Brazil. In the 100th minute, she and Ludmila both slid for the ball in the area and the Brazilian forward’s cleats connected with Labbé.

Late in extra time, Debinha took out Labbé’s legs from underneath her while the keeper was in the air, resulting in a scary-looking fall. After being looked at by trainers both times, and with Kailen Sheridan warming up on the sidelines, Labbé stayed on the pitch for penalties.

Facing Brazil’s fourth penalty taker, Andressa, and with Canada already having missed earlier in the shootout, Labbé dove to her left to deny the Brazilian. After Gilles scored on Canada’s fifth attempt, Labbé came up with another stop on Rafaelle to secure the win for Canada.

Her teammates quickly swarmed her in celebration, with Sinclair hugging and crying with her keeper.

“All tournament I’ve said, ‘Big players step up in big moments.’ Steph – I had no doubt in my mind when that penalty was taken it was going to be saved,” said Priestman.

There were questions whether Labbé or Sheridan should be Canada’s starting goalkeeper before the tournament, but Labbé proved that her experience matters. She now has 81 caps and 40 clean sheets.

Her strong presence allowed Canada to reach penalties. In the 119th minute, Erika had a header labelled for the bottom corner, but Labbé denied her with another diving stop.

A surprise at centre-back

In a surprising move, Priestman opted to start Gilles at centre-back over the more experienced Shelina Zadorsky. While Gilles has been impressive for Canada this year, she has just seven caps compared to 74 for Zadorsky.

There were shaky moments for Gilles in the first half. In the 40th minute, she gave the ball away to Debinha – the 2021 NWSL Challenge Cup MVP – but Labbé bailed out her defender with a strong save.

Gilles, who plays for FC Girondins de Bordeaux in France, settled down in the second half, and almost gave Canada the lead. In the 59th minute, Janine Beckie set her up on a set piece, and Gilles’s header rang off the crossbar, denying her of her first international goal.

On the defensive end, Gilles came up with several timely tackles, including one in the 69th minute that prevented Ludmila from a chance on goal.

When the game went to penalties, Priestman chose Gilles to be Canada’s fifth shooter, a difficult position for any player, let alone one featuring in her first major international tournament and making just her seventh start for her country.

But if she was feeling the pressure, she didn’t show it, as she calmly slot it into the left side of the net, setting the stage for Labbé’s heroics.

What’s even more remarkable about Gilles’s story: she didn’t start playing soccer until she was 16. She was a tennis player but said there “wasn’t enough physical contact,” so she quit to join her high school soccer team.

Sinclair’s struggles from the spot

Another startling storyline from Friday: Of the five Canadian penalty takers, Sinclair was the only one to miss her shot. The captain stepped up first for her team, but Brazilian goalkeeper Barbara made the save.

It’s not the first time in recent years that Sinclair has missed a penalty for Canada. At the third-place match against Sweden in the 2019 Algarve Cup, Sinclair was once again the lone Canadian to miss her attempt.

But the Canadian captain, 38, has stepped up to the spot for her country time and time again, most notably in the opening game of the 2015 FIFA Women’s World Cup. In front of thousands of fans in Edmonton, Sinclair coolly put away the lone goal in stoppage time against China to secure the win.

There has been criticism thrown in Sinclair’s direction for not taking penalties in recent moments for Canada on the big stage. In the round of 16 match against Sweden in the 2019 FIFA Women’s World Cup, Canada was awarded a penalty that could have potentially tied the game. Sinclair asked Beckie if she wanted to take it. Beckie agreed, but her attempt was saved by Swedish goalkeeper Hedvig Lindahl.

A similar situation occurred in Canada’s second match of this tournament against Chile. It was once again Beckie who stepped up to the spot after Sinclair drew a foul, but the young forward’s shot rang off the post.

But for Canada to have a future beyond Sinclair, the team needs others to step up in these pressure situations, and the captain understands this and is helping to build the next generation to take the reins.