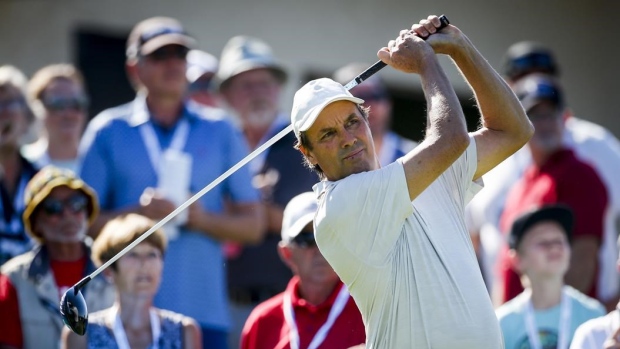 CALGARY — Doug Barron saved his best for last to move to the top of the Shaw Charity Classic leaderboard on Saturday.

Barron was the lone golfer in the 65-player field at the PGA Tour Champions event to eagle the par-5 18th hole at Canyon Meadows Golf and Country Club.

“I go for everything,” said Barron, 52, of Memphis, Tenn., who carded his second straight round of 6-under 64 to take the tournament lead at 12 under. “That’s maybe my weakness out here, I don’t lay up very much.

“I wanted to be in the final group (on Sunday), so I think the only way – my only path to the final group – was to make eagle, so I can’t believe I did it. Yesterday I started fast, today I finished fast.”

Following a great drive, Barron striped his second shot over a pond in front of the green to within 10 feet of the pin on the par-5 finishing hole and then drained the putt.

“It was an easy hybrid,” he said of his near-perfect approach shot. “If I hit my hybrid solid, it was a perfect club. I thought the odds were in my favour to land on land, but when you go for something like that, you have to accept the fact that sometimes it’s not going to land on land.”

Heading into the final round of the senior circuit event for golfers aged 50 and older, Barron is just one stroke ahead of Canadian Stephen Ames and Americans Steve Flesch and Billy Mayfair.

Calgary's Ames, a Canadian Golf Hall of Fame member, birdied seven of his first 11 holes to take a five-shot lead at one point before falling back with three bogeys on the back nine.

“I didn’t see that part,” said Ames, who was among a patron group who brought the tournament to Calgary in 2013. “Obviously I missed it. I was thinking everybody else was right there with me. I didn’t realize it was going to be that far in front, which is nice. I did falter and come back to the field a little bit, but you’re watching everybody.”

Ames then birdied the final hole of the par-70, 7,086-yard layout to finish in a tie at 11 under with Flesch and Mayfair, who led after Friday’s opening round.

Brandt Jobe shot 66 and heads into Sunday’s final round alone in fifth spot at 9 under, while David McKenzie and Ken Duke are tied for sixth overall at 8 under.

A day after opening the senior tour event with a 7-under 63, Mike Weir of Brights Grove, Ont., shot an even-par round of 70. He’s tied for eighth with Gibby Gilbert III, Alex Cejka, Tim Herron, Paul Stankowski and Billy Andrade.

“I don’t know what the word would be to describe that round,” Weir said. “I putted horribly, that’s the thing. Three three‑putts and missing some shortish putts, that’s really what held me back.”

After carding a 68 on the opening day of the tournament, David Morland IV, who is originally from Aurora, Ont., improved by two strokes on Saturday.

“Tomorrow I'm going to need a real low one,” said Morland, who’s currently sitting in a tie for 14th at 6 under with Matt Gogel. “The course is playing nice. Greens are rolling good, so hopefully tomorrow’s the low one.”

Although Morland rolled in six birdies on his way to shooting 66, he also had a double bogey on the seventh hole and a bogey on 17.

“I had one little hiccup on seven, but other than that I played solid, made a few more birdies on the back side and just tried to close the gap with the leaders,” he said.

Dennis Hendershott of Brantford, Ont., fell back to even par for the tournament after carding a round of 2-over 72. He’s tied for 41st with six other golfers.

After starting on the 10th hole, Olin Browne had seven birdies through his first nine holes to set a tournament scoring record of 28 on the back 9.

He then had eight pars and one bogey on the front nine to shoot a 6-under 64 to tie him with McKenzie for the best round of the day, which put him in a tie for 16th place overall at 5 under.

Despite getting a hole in one on the 206-yard, par-3 12th hole, Frank Lickliter II couldn’t get anything going after that and wound up shooting a round of 1-over 71. He’s well back of the leaders in a tie for 51st spot at 2 over.

This report by The Canadian Press was first published Aug. 14, 2021