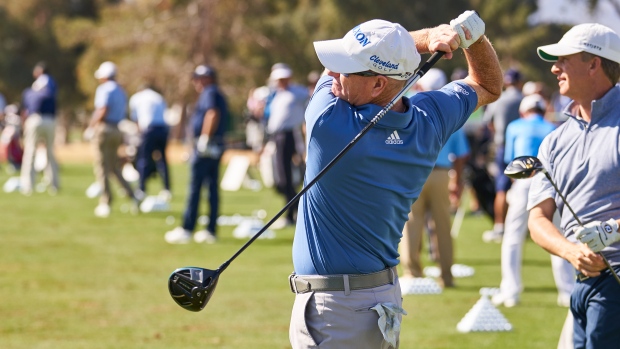 CALGARY — Steve Flesch wasn't as sharp on the greens, yet still managed to move into first place at the Shaw Charity Classic.

After coming within a shot of the course record with an opening 62 at Canyon Meadows Golf and Country Club, Flesch carded a 2-under 68 on Saturday for a one-stroke lead at 10 under in the PGA Tour Champions event.

"Today I played just as well as yesterday, but I didn't hole any putts," said Flesch, who had a chance at eagle on the par-5, 18th hole, but settled for birdie. "Hopefully I'll convert some more birdies, because I expect it will take a pretty good round to win."

Flesch's birdie on the final hole of the par-70, 7,086-yard layout gave him a one-shot lead over Tom Gillis and Wes Short Jr. heading into Sunday's final round.

"I'm surprised I'm leading," Flesch said. "I expected if I shot 2 under today, I would have lost some ground."

Gillis made six birdies on his front nine and played his final nine in par for a round of 6-under 64.

"The first hole, I hit it right of the green and I was like, here we go again, and then chipped it in, which none of that's been happening," said Gillis, who admitted he's been struggling with his game all season. "So, that's kind of how it started. It put me in a good frame of mind."

Gillis moved from 21st place into a tie for second spot with Short at 9 under.

"I'm going to try to do whatever I did today, that's it," Gillis said. "Not overthink it and play free, just go from there. We'll see what happens. I don't really have any expectations the way the year's been so far."

Short birdied the 18th to get into Sunday's final grouping with Flesch and Gillis.

"I like the course, it suits me well," said Short, who followed an opening 64 with a 67. "I've got a chance to win the tournament. That's all you want going into the last day."

Tom Byrum had a 69 and was alone in fourth place at 8 under.

Michael Bradley, who tied the course record with an opening 61, was in a seven-way tie for fifth at 7 under. Included in the logjam were two-time Shaw Charity Classic champion Scott McCarron (69), Corey Pavin (67). Gibby Gilbert (63), Ken Duke (68), Tim Petrovic (69) and Billy Andrade (69).