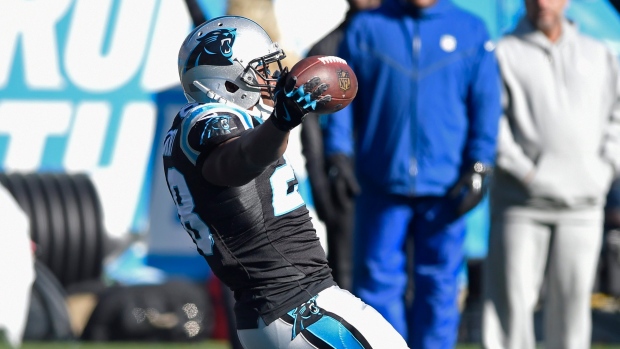 Newton's 62-yard run set up Stewart's 1-yard touchdown leap — his third TD run of the day — with 1:47 remaining to lift the Panthers to a 31-24 victory Sunday, snapping the Minnesota Vikings' eight-game win streak.

Stewart accounted for 103 of Carolina's 216 yards rushing — including a 60-yard touchdown burst in the first quarter — against the league's second-ranked defence, as the Panthers prevented the Vikings (10-3) from clinching the NFC North division title.

But it was Newton's run that turned out to be the play of the game.

After Carolina squandered an 11-point fourth-quarter lead, Newton rolled out to his left, saw an opening and the 6-foot-5, 245-pound quarterback was off to the races before being pulled down from behind at the Vikings 8-yard line .

Newton joked after the game that he got tackled on purpose.

"It was very strategic, when I think back," the 2015 league MVP said with a smile. "Because if I would have scored, they would have had all of their timeouts left. So I felt like, hey, let me flip this car back into third gear."

The Vikings did use all of their timeouts, but the Panthers still scored. The Vikings turned the ball over on downs on their final possession.

"There's only one guy in the league that is doing that," tight end Greg Olsen said of Newton's scramble. "We had everything against us and we had struggled out last three possessions. And for him to pop something that like, that was huge."

Said Vikings defensive tackle Linval Joseph: "He is big, strong, and can throw the ball. He is a first-round draft pick, a Heisman Trophy winner and a great player. He makes plays."

Newton threw for 137 yards and a touchdown and ran for 75 yards as the Panthers (9-4) recorded their third 200-yard rushing game of the season to move into a tie with the New Orleans Saints atop the NFC South.

Carolina's defence did its job , too.

They sacked Case Keenum six times, forced three turnovers and came up with a crucial stop late to force a field goal.

"We turned the ball over three times and gave up 200-plus yards rushing. That's not like us," Vikings coach Mike Zimmer said.

LATE STOP: The Panthers seemed in control midway through the fourth quarter leading 24-13, but the Vikings came charging back to tie it as Keenum hooked up on a 52-yard scoring strike with Adam Thielen on a crossing route. Blake Bell added 2-point conversion catch to cut the lead to three.

On Carolina's next possession, Vikings safety Andrew Sendejo intercepted Newton on a ball that sailed off the hands of Christian McCaffrey and returned it to the Carolina 6. But Carolina's defence had a huge stop, holding the Vikings to minus-3 years on three plays to force a field goal with 3:07 left.

NO DIVISION TITLE: Even with the loss, the Vikings could have wrapped up the division had the Packers and Lions also both lost. Instead, both division foes won in overtime.

"We need to get this division wrapped up, but to do that, we have to play better football," Vikings tight end Kyle Rudolph said.

McKINNON OVER MURRAY: The Vikings turned to Jerick McKinnon after Latavius Murray could find no room on the ground and was held to 14 yards rushing on nine carries. McKinnon was the more effective back, rushing for 46 yards on seven carries.

FINALLY, A PICK: It took 13 games, but the Panthers finally got at an interception from their starting cornerbacks. Daryl Worley and James Bradberry both intercepted Keenum on Sunday after being shut out the previous 12 games.

"Hopefully now everyone will stop talking about it," Bradberry quipped.

JUMBO PACKAGE: Stewart had a 60-yard TD run on Carolina's first possession on a third-and-1. The Panthers shifted four offensive linemen, including left tackle Matt Kalil, to the right side of centre Ryan Kalil and ran that way. Once Stewart got through the line, it was clear sailing. He sealed the run by stopping and falling back into the end zone, like a kid falling into a pool.

"When you see a team that is lined up like that in the box, you just hope to see a hole because you know there is no one else in the secondary," Stewart said.

Vikings: Host the Bengals next Sunday.

Panthers: Host the Packers next Sunday.