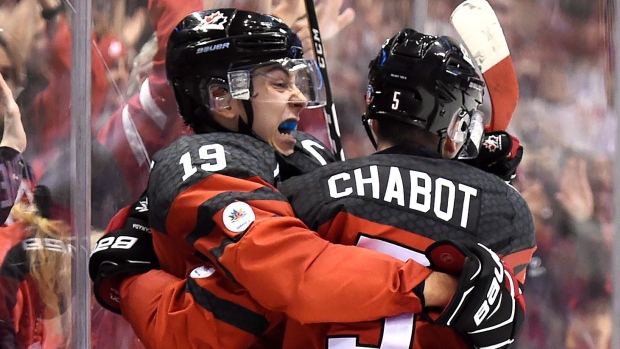 TORONTO — One year ago to the day Team Canada lost the opener of the world junior hockey championship, an omen perhaps to the worst showing for the country in almost 20 years.

The Canadians got it right to start the tournament this year, sailing past the Russians 5-3 in their preliminary-round opener on Monday night. Canada scored three power-play goals, including a pair by captain Dylan Strome, and outshot their long-time international rivals 37-17.

Shut out of the medal hunt in three of the past four world junior tournaments, this was the kind of mostly emphatic start the Canadians needed. Canada dropped their opener to the Americans last December in Finland — losing 4-2 — and eventually finished sixth, the worst result for the country since an eighth-place outcome in 1998.

"They're a pretty fast team," said Sergachev, a Montreal Canadiens prospect who scored the first Russian goal. "But we can beat them all the time because they get weak in the second and third periods. They're just pretty good in the first."

Canada indeed started fast, bursting out of the gate at Air Canada Centre with speed and energy. The Canadians outshot the Russians 7-1 over the first seven minutes or so of regulation, Tyson Jost getting on the board after three minutes ticked by.

Speeding down the right side, the St. Albert, Alta., native was fed cross-ice by defenceman Philippe Myers, Jost lifting a nifty backhand over the glove of Ilya Samsonov, the Washington Capitals' top pick in 2015.

"We expect that, with the speed we have," head coach Dominique Ducharme said. "It's part of our identity."

Russia halted the momentum around the midway point of the period when Denis Guryanov, a Dallas Stars first-round pick, won a puck battle in the Canadian corner. He then dished it to Sergachev, the 18-year-old blue-line prospect picked ninth overall at the 2016 draft, and he whipped a shot from above the slot which beat Canadian netminder Carter Hart.

It was only the Russians' second shot, Hart seemingly unable to pick it up cleanly through a maze of bodies. Goaltending is among the central question marks for Canada, Hart's performance (three goals on 17 shots) is unlikely to inspire much early confidence.

Russia got its best pressure of the second frame with Thomas Chabot in the box for slashing and the score still tied at one. But the Canadians survived, a key Blake Speers blocked shot aiding in the nervous final moments of the Russian advantage.

Strome, who called Speers Canada's hardest working player in the win, scored on a power play a short while after his teammate's short-handed efforts. The 19-year-old Strome, who grew up 15 minutes outside of Toronto in the suburb of Mississauga, fired a one-time shot from the right face-off circle, the attempt just getting under the glove of Samsonov. Strome was set up nicely by Matt Barzal, the New York Islanders' first-round pick who threaded a pass from the opposite face-off circle.

Nicolas Roy upped the Canadian lead to two less than four minutes after that. Fighting for control of the puck with a Russian in the slot, the six-foot-four, 193-pound centre quickly shot it after he gained control, beating Samsonov.

Despite Sergachev's proclamations of Canadian weakness in the second period, shots were actually 15-4 for Canada in the middle frame and 27-9 overall after 40 minutes.

Canada struck again on an early power play in the third, a highlight-worthy play from Barzal. He stormed to the left in the area just in front of Samsonov, sending the shot in the opposite direction, the attempt just sailing over the glove of the Russian netminder. Barzal was fed from behind the net by Pierre-Luc Dubois.

After the Russians cut it to 4-2, Strome increased the lead back to three on yet another man advantage, the Arizona Coyotes' top prospect scooping up a Barzal rebound for the Canadians' third power-play tally of the game.

"We just kept saying, 'if we're getting the opportunities they're going to go in eventually'", Strome said. "Two great plays where I just picked up the trash."

Barzal, added his third point of the night on the play, finishing with a goal and two assists. He was named Canada's best player after the game.