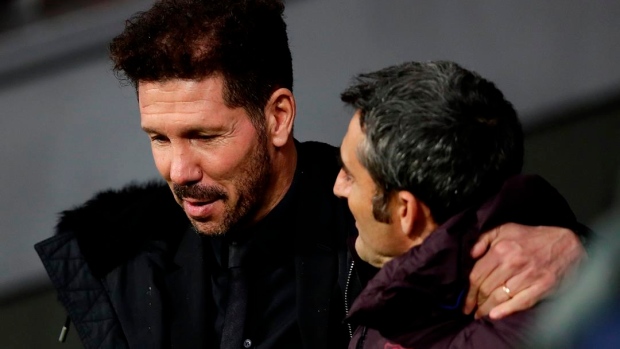 MADRID — This is uncharted territory for many Atlético Madrid fans.

Few other times in recent years have they seen their team struggle so much under Diego Simeone.

Few other times have they seen their coach fail so often while trying to put the team back on track.

Atlético hit a new low under Simeone on Thursday when it was eliminated by third-division club Cultural Leonesa in the round of 32 of the Copa del Rey. The 2-1 loss in extra time was the team's worst result in the cup competition since losing to third-tier club Albacete at the same stage in 2011-12.

Two days after that loss in 2011, Atlético hired the then-mostly unknown Simeone to replace Gregorio Manzano, a move that kick-started one of the club's most successful eras and led to a Spanish league title, two Europa League trophies and two Champions League final appearances.

Atlético did go through difficult moments under Simeone, including when the team failed to advance past the group stage of the Champions League a couple of seasons ago.

There is a greater sense of urgency about the team's struggles this time.

In addition to Wednesday's embarrassing Copa del Rey elimination, Atlético lost the Spanish Super Cup final to Real Madrid on Jan. 12, and already is eight points off the Spanish league lead after 20 matches.

Before, there used to be a notion that Simeone would quickly turn things around and put the team back on track, but this time there aren't many signs things will improve again soon.

Atlético has yet to impress since undergoing its biggest squad revamp under Simeone at the end of last season, when it lost Antoine Griezmann and other veteran players such as Filipe Luís and Diego Godín. Young Portugal forward João Félix, who arrived to replace Griezmann after a transfer from Benfica worth more than 120 million euros ($133 million), has yet to meet expectations.

More concerning, Atlético is not being nearly as effective as it used to be, when it always seemed to find a way to win matches despite not playing well.

The team remains solid defensively — it has the second-best defence in the Spanish league with 14 goals conceded — but it hasn't been able to do much in attack recently.

“Everything is harder when you can't score,” Simeone said.

Only seven teams have scored fewer goals than Atletico's 22 in the 20-team standings.

Diego Costa has been mostly out injured, and Víctor “Vitolo” Machín and Álvaro Morata haven't done much in attack. Morata is the team's leading scorer with 10 goals in all competitions, and no one else has more than five.

“We have to be humble enough to be self-critical,” Simeone said. “We need to keep working to try to be ready for the challenges that we have ahead of us. We have a very good squad and I'm sure that the results that we want will start arriving soon.”

Atlético biggest chance to rebound will come next month against European champion Liverpool in the last 16 of the Champions League. The first leg will be on Feb. 18 in Spain.

This version corrects the first leg of the Champions League last-16 game being in Spain, rather than England.