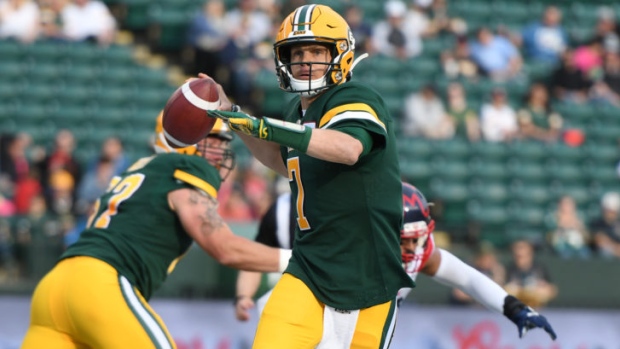 EDMONTON — Any thoughts that the winless Toronto Argonauts might represent one of those trap games for the Edmonton Eskimos went right out the window last weekend.

While the Argonauts are 0-5 after a 26-16 loss to the Calgary Stampeders last Thursday, and are struggling mightily, the Eskimos don't have the luxury of taking anything for granted coming off a mistake-filled 20-10 loss to the Montreal Alouettes Saturday.

The Eskimos, 3-2, have lost two of their last three games and didn't score a touchdown in either loss.

Watch tonight's game LIVE across the TSN Network and on TSN Direct at 9:30pm et/6:30pm pt.

"I don't believe in trap games. I don't," Edmonton head coach Jason Maas said ahead of the Argos' visit to Commonwealth Stadium on Thursday. "When you're focused on the process like we've been this year and you just say it's week-to-week, your record is 0-0. You don't stack wins. You don't stack losses. You're just trying to go 1-0."

"We've got to win this week. That's all our focus is . . . it doesn't matter what anybody's record is. Whoever comes in this building has to leave with a loss. That's our mentality," he said.

Trevor Harris had a streak of 228 straight completions without an interception come to an end when he was picked off by Greg Reid in Montreal, one of two interceptions Harris threw on the day. The offence never got in sync as the Eskimos had an 11-game winning streak against the Alouettes.

"It's just details and making sure we're detailed no matter what," said Harris, who was held to a season-low 271 passing yards on 29 completions. "No matter where we're at on the field, no matter who the opponent is, it's all about the details – finishing drives, finishing plays and being ready to go from snap one."

While Edmonton's offence boasts some impressive numbers – 422 net yards per game and 1,633 passing yards leads the league -- they didn't reach the end zone in Montreal. It was more of the same in a 28-21 loss to the Winnipeg Blue Bombers on June 27 as all of their points came on seven field goals by Sean Whyte.

"This is pro football," Harris said of trying to get back on track against the Argonauts. "There's no gimmes in pro football. We know that they're going to be hungry. Their backs are against the wall and they're ready to fight. We have to be too."

Penalties remain a problem for the Eskimos. They had a 33-yard touchdown pass from Harris to Kenny Stafford called back by a holding penalty and two interceptions taken off the board by illegal contact penalties in Montreal.

"It's assignment, alignment and make the play. That's it," Stafford said. "Make football simple. Go out there and execute, believe in one another and play hard. That's the focus. There's nothing elaborate about it."

"We're trending down when it comes to penalties. It's not like we're trending up. We've just got to clean up the mistakes, and that's offence, defence and special teams," he said.

The Argonauts will be without starting running back James Wilder Jr. and slotback Armanti Edwards, who are on the one-game injured list.

BY THE NUMBERS – McLeod Bethel-Thompson put up some impressive numbers in the loss to Calgary, completing 32 of 42 passes (76.2 per cent) for 343 yards and two touchdowns, but he also had four passes intercepted. With starter James Franklin on the six-game injured list (torn hamstring), Bethel-Thompson will make his fourth straight start.

COMING AND GOING – The Argos have struggled on both sides of the ball. They've scored just 75 points, last in the league, and allowed 188 points, the second-highest total (B.C. at 196).

GABLE OUT – Edmonton's sputtering attack will be without running back C.J. Gable, who has been laced on the injured list. Shaq Cooper will take Gable's place behind Harris.

PROTECTION – The Eskimos have given up just one quarterback sack this season, against Winnipeg. Hamilton holds the record for fewest sacks in an 18-game season with seven, set in 1999.