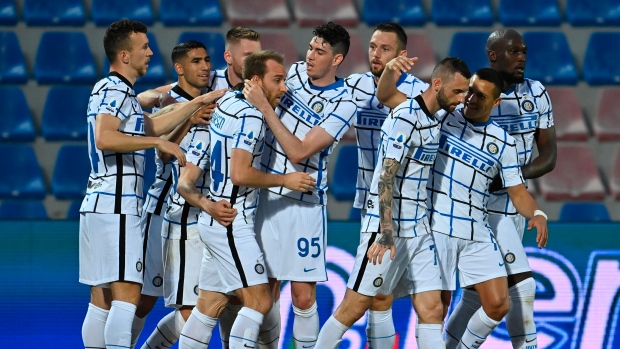 ROME — A Europa League final in his first season.

An almost-certain Serie A trophy in his second year.

Just like at Juventus and Chelsea, Antonio Conte is leaving his mark at Inter Milan.

The Nerazzurri won at last-placed Crotone 2-0 on Saturday to give themselves a chance to clinch the Serie A before the weekend ends.

What's more, Inter is poised to end a nine-year stranglehold on the Serie A title by Juventus — with Conte himself having started the Bianconeri's run.

“This is satisfying and the players deserve congratulations,” Conte said before joining his already-celebrating team to sing and dance in the changing room.

It was quite a different scene in the home team's changing room, as Crotone was relegated.

“I made the most difficult choice by coming to Inter," Conte added, referring to the club's long dry spell. "I love a challenge and came here to challenge myself."

Conte also excels at challenging his players. Players like talented Denmark midfielder Christian Eriksen, who was largely an enigma during his first year with Inter after transferring from Tottenham midway through last season.

Eriksen, who has developed into one of the keys of Inter's unbeaten run during the second half of this campaign, scored the opening goal midway through the second half on a play that began with a backheel flick from fellow substitute Alexis Sanchez.

Four minutes after the subs went on, Romelu Lukaku took Sanchez’s creative pass and left it for Eriksen to score with a drive that deflected in off a defender.

Achraf Hakimi sealed it for Inter by finishing off a counterattack in stoppage time.

The “LuLa” strike tandem of Lukaku and Lautaro Martinez also accounted for two shots off the post. Lukaku also had a goal disallowed by the VAR when Ivan Perisic was ruled offside.

Stefano Sensi, another usual bench member, got a rare start and was involved in several first half chances.

“Our campaign comes from a constant growth from the team in every area, including mentality," Conte said. "The sharing of a vision and experiencing it intensely. Whether you’re playing or on the bench, this squad has turned into a team made of granite.”

Conte said there were no plans to gather the team to watch the Atalanta game.

“We know that we’re on the verge and are quite relaxed about it," he said. “I don’t think it’s right to depend on someone else.”

Milan bounced back from consecutive losses with a 2-0 win over relegation-threatened Benevento, which is coached by former Rossoneri standout Filippo Inzaghi.

Calhanoglu’s goal was the product of an exchange with Franck Kessie, while Hernandez turned in a rebound of a shot from Zlatan Ibrahimovic.

Earlier, a late equalizer from Riccardo Saponara earned Serie A debutant Spezia a much-needed point at Hellas Verona in a 1-1 draw. Spezia, based in Liguria, moved three points clear of the drop zone.