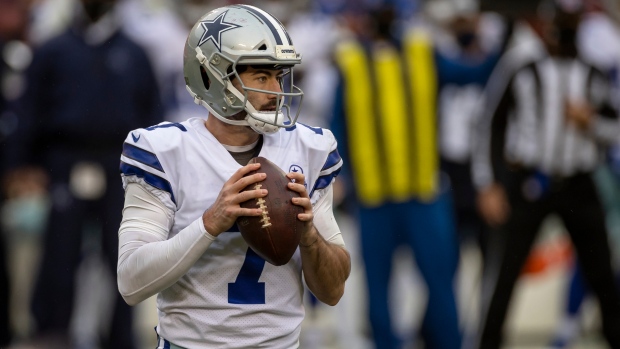 The NFC L-East will have the spotlight to itself on Sunday Night Football on TSN.

The Philadelphia Eagles, at 2-4-1, will host a Dallas Cowboys side that is 2-5 and will be trotting out their third different quarterback of the season.

Dak Prescott is lost for the year, while Andy Dalton is in the concussion protocol, meaning the Cowboys will now turn to rookie Ben DiNucci.

The seventh round pick out of James Madison will make his first career start under the prime time lights, and will do so as a significant underdog.

The number for this game has ballooned all the way to Philadelphia -11.

DiNucci’s outlook for Sunday night looks bleak given the strength of this Eagles defence and the status of his offensive line.

Dallas is playing backups or third stringers at nearly every position on the offensive line, which spells disaster against this Philadelphia front-seven.

They feature two of the highest graded interior rushers in Fletcher Cox and Malik Jackson, as well Brandon Graham who ranks 16th among edge rushers in total pressures.

Meanwhile, the Cowboys offensive line is fresh off surrendering six sacks to Washington, and ranks 18th in sacks allowed per pass attempt.

That unit has disappointed over the past few weeks in run blocking as well, failing to open up holes for Ezekiel Elliott.

On the other side of the ball, the matchup is even more favourable for the Eagles.

The Dallas defence has allowed a league-high 34.7 points, and over 408 yards of offence per game. The Cowboys grade out as PFF’s worst overall defence, including the league’s 32nd graded coverage unit.

That’s good news for Carson Wentz, who will once again be asked to shoulder the majority of the offensive load with Miles Sanders banged up.

Wentz has accounted for eight total touchdowns over the past three weeks, and has a new favorite target in Travis Fulgham.

2nd highest-grade among all WRs pic.twitter.com/Nd2iVoyuyq

The sophomore receiver has caught 21 balls for 300 yards and two scores over the past three weeks.

Expect him to be targeted often as the starting Dallas corners have yielded a 62% completion rate and 592 receiving yards on 70 targets this season.

As tempting as it is to bet against the Cowboys, it’s incredibly difficult to back the Eagles.

Don’t forget this is the same team that trailed the 1-6 New York Giants by 11 points with five minutes to play in Week 7, before a furious rally allowed them to steal a victory.

This view of the game-winning TD is elite 🔥 @cj_wentz @BostonScott2 @Eagles pic.twitter.com/fPwcoVAq3e

Philadelphia has a loss on its resume against the dreadful 2-5 Washington Football Team, and a tie versus a one-win Cincinnati squad.

As bad as Dallas is, and they are atrocious, I just can’t stomach laying 11 points with Philly.

Instead of playing the spread or total in this game, I recommend checking out some of the other betting options.

Speaking of which, Carson Wentz is being seriously undervalued by oddsmakers ahead of this contest.

You couldn’t draw up a more favorable matchup for him, and with Sanders sidelined, we can expect an uptick in his pass attempts.

In two games without Sanders this season, Wentz has thrown the ball 42 and 43 times.

He’s racked up at least 270 yards and two TDs in both of those outings, while Sanders’ replacement Boston Scott has averaged just 3.85 yards per carry.