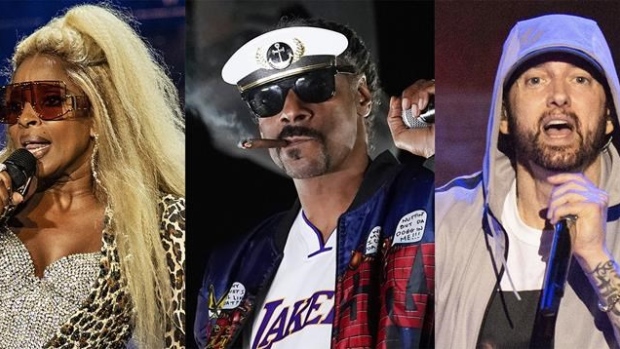 For the first time in nearly 30 years, the Super Bowl – one of the sporting world’s greatest spectacles – is back in Los Angeles.

While we don’t know which teams will play in Super Bowl LVI on Feb. 13 just yet, the 2022 Pepsi Super Bowl LVI Half Time Show’s lineup at SoFi Stadium has been announced and it’s one befitting of a city that prides itself on delivering world-class entertainment. The NFL’s championship game was last played in the L.A. area in 1993, when the Buffalo Bills and Dallas Cowboys met at the Rose Bowl.

Watch these five music titans get ready for the #PepsiHalftime Show on Feb 13th. https://t.co/Zgesis0IWB pic.twitter.com/KiUqUjYZxi

This group of five have combined for 44 Grammys, have 22 No. 1 Billboard albums and are considered to be legends of the hip-hop and rap industries. Leading the charge is Eminem who has 15 Grammys.

The Super Bowl performance will be extra special for Dre, Snoop Dogg, and Lamar since they are all from the Southern California area.

“The opportunity to perform at the Super Bowl Halftime show, and to do it in my own backyard, will be one of the biggest thrills of my career,” Dre said in a statement earlier this year. The 56-year-old also added that he believes that this will be “an unforgettable cultural moment”.

Dre, Snoop Dogg, Lamar, Eminem, and Blige will join a list of highly talented musical acts that have performed during the Super Bowl halftime show in recent years including Bruno Mars, Coldplay, U2, Jennifer Lopez, Shakira, and Toronto’s The Weeknd, who performed in last year’s halftime show at Raymond James Stadium in Tampa, Fla.

The NFL, Pepsi, and Roc Nation have teamed up to put together the last three Super Bowl halftime shows and this year will also be co-produced by Emmy-nominated producer Jesse Collins.

The Super Bowl halftime show has become as much of a cultural phenomena as the game itself. Football fans and non-sport fans alike take time to watch the performance, which is one of the musical events of the year.

Performance acts do not get paid for their appearance at the Super Bowl, but the impact of the game is shown in their music sales. In 2020, Shakira saw streams of her music go up 230 per cent and Lopez’s skyrocketed 335 per cent the week after the performance, according to Spotify.