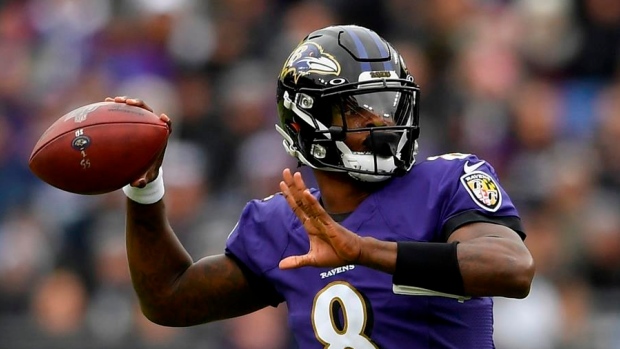 LOS ANGELES — Sean McVay and the Los Angeles Rams know what it’s like to redefine how the NFL looks at offensive football, so they appreciate what Lamar Jackson is doing this season with the Baltimore Ravens.

The Rams aren’t exactly looking forward to seeing the latest innovations in person Monday night when they welcome the team on the NFL’s biggest surge to the Coliseum.

Well, most of the Rams aren’t, anyway.

“Lamar, love him and know the type of person he is, so it's like the proud big bro watching him from afar, the success he's having,” said Rams safety Eric Weddle, who played the past three seasons for Baltimore.

“It's going to be a huge challenge for us,” Weddle added. “You can play defence great and be perfect, but he's the X factor, and you can't get down when he does make some plays or converts third down just by being him. You've just got to keep plugging along. But shoot, we love the challenge, man. This is what it's all about, and we get them at home.”

Jackson and the Ravens (8-2) get a national spotlight when they take on the Rams (6-4), whose attempt to stay in the NFC playoff race won’t survive many more defeats. While Los Angeles has one of the NFL’s most effective defences in recent weeks, it hasn’t seen anything like the multitalented Jackson, who presents innumerable challenges to any group.

The Ravens are on a six-game winning streak heading to LA, and Jackson is dazzling the league with his arm and his feet. Rams defensive co-ordinator Wade Phillips agrees with observers who compare Jackson favourably with Michael Vick, and he should know: Phillips spent two seasons with Vick and the Atlanta Falcons, even serving as interim head coach.

“He’s certainly the MVP this year,” Phillips said. “He’s a tremendous runner, but the other part of it is they’ve made a lot of explosive plays, not just in the running game. ... It gives me a headache. It’s a great challenge.”

The Rams are counting on another strong defensive game to have a chance, because their two-year run as one of the NFL’s most dynamic offensive forces is over. Although their overall production hasn’t dropped as steeply as their critics seem to believe, McVay and his offence have endured several terrible performances in which they looked nothing like the innovative team that scored nearly 33 points per game last season.

The Ravens are scoring 34.1 points per game behind Jackson.

Here are more things to know about Monday night:

Receiver Brandin Cooks is expected to return for the Rams after his second concussion of the season kept him out of the past two games. Cooks is Los Angeles’ top deep threat and a sure-handed target in all areas, and his absences have been a factor in the Rams’ struggles in the passing game. Josh Reynolds, the Rams’ No. 4 receiver, has come through with six catches for 104 yards in the past two games. Jared Goff is hoping to have all four of the Rams’ top receivers and both of his pass-catching tight ends against the Ravens.

The Ravens know their success on offence could depend heavily on stopping sack specialist Aaron Donald. The two-time NFL Defensive Player of the Year had two sacks last week against the Bears to bring his season total to eight.

“He's got it all. He has speed, strength, quickness. He's definitely got the whole package,” Ravens veteran guard Marshal Yanda said. “He's the No. 1 defensive player in the NFL for a reason.”

Yanda, a seven-time Pro Bowl selection, is eager for the task against Donald, who typically wreaks his havoc in the middle of the offensive line.

“Most guys in this league are competitors and I'm definitely a very competitive guy,” Yanda said, “so I'm excited for a challenge.”

The Rams are eager to see cornerback Marcus Peters, who started the Super Bowl last season before Los Angeles traded him to Baltimore last month as part of their moves to acquire Jalen Ramsey. Peters is still regarded warmly around the Rams, but they weren’t willing to sign him to an extension after his contract expires this winter. Peters has made an immediate impact with the Ravens, returning two interceptions for touchdowns.

Weddle started all 49 of the Ravens’ games over the past three seasons before they cut him in March. He signed with the Rams and has played well, but the veteran safety raised eyebrows earlier this week when he said he wouldn’t share inside information about his former Baltimore teammates and coaches with his new employers and teammates in Los Angeles. Weddle says he would consider it a betrayal of his friends.

Although Jackson is the difference-maker in the Ravens running game, Mark Ingram and Gus Edwards form a dangerous tandem out of the backfield. Ingram has rushed for 667 yards and Edward has 390, including a 112-yard performance against Houston last week with a 63-yard touchdown run.

“I like the way they complement each other, I really do,” coach John Harbaugh said. “They are different enough to give the defence some issues with their different styles and how they run.”