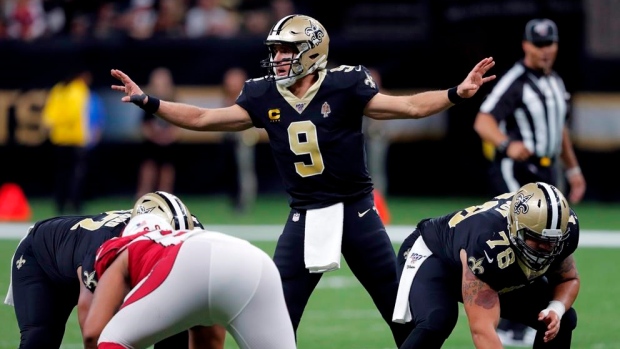 NEW ORLEANS — If the increasingly healthy New Orleans Saints perform as well in the second half of their season as the first, they'll win a franchise record 14 regular season games.

"I would take it," Saints quarterback Drew Brees said. "But we've got a lot of football left. I'm excited to play these games because I want to see how good this team can be. I don't think we've reached our potential yet."

If Brees is right, then a rough season might get rougher for the free-falling Atlanta Falcons (1-7), who'll try to stem a six-game slide when they visit first-place New Orleans (7-1) on Sunday.

The Saints not only survived, but thrived, when Brees was forced to miss five starts with a thumb injury. They went 5-0 with Teddy Bridgewater filling in. Then Brees came back in Week 8 and passed for 373 yards and three touchdowns, even better than his only other full game in Week 1, when he passed for 370 yards and two scores.

"How do you get better after missing five games? I don't know," Falcons coach Dan Quinn said. "Not only did he not miss a beat, he played fantastic. ... He sets a standard of consistency and he just never seems to back off."

Brees made do in Week 8 without dynamic running back Alvin Kamara or top receiving tight end Jared Cook, who have both missed two games but appear ready to return after last week's bye. Considering top defensive tackle Sheldon Rankins missed the season's first three weeks while recovering from an Achilles tendon tear last January, the Saints enter Week 9 healthier than at any point this season.

"It's scary. We got so much talent," Kamara said after asserting he was ready to play this weekend. "Knowing what we have, everybody's excited."

The Falcons also are coming off a bye week and hoping the shuffling of coaching assignments, combined with QB Matt Ryan's anticipated return from an ankle injury that sidelined him one game, could bring about a morale-boosting win over an NFC South Division rival.

"It has been a tough beginning for us," Quinn said. "Matt is definitely on the way back. ... He and Drew have battled many times on opposite sidelines. We're certainly anticipating those two going at it head-to-head again."

Sean Payton, the Saints' coach since 2006, has seen the favoured team struggle enough in this regional rivalry to envision a competitive game, regardless of how much better New Orleans has looked this season.

"Having played them as many times as we have and knowing each time how these games have finished, it really hasn't mattered, the records heading into the game," Payton said, noting that three of Atlanta's losses were by a touchdown or less. "They've been in some hard-fought games and they've had some injuries."

Quinn's decision last January to fire Marquand Manuel and name himself defensive co-ordinator has been a bust. The Falcons rank last in takeaways, sacks and third-down percentage. They're second-worst in opponents' passer rating and third-worst in scoring average.

Quinn announced a change to the defensive staff this week as Raheem Morris moved from receivers coach to the secondary. It's the second time he's made a switch after giving linebackers coach Jeff Ulbrich more responsibility with play-calling five weeks ago.

The hope is that Morris, a former head coach with Tampa Bay, can improve communication and technique.

New Orleans' defence has stifled five straight opponents, not allowing any of them more than 257 net yards.

Atlanta ranks ninth in the NFL offensively — ahead of New Orleans — and first in passing. Rankins said some of the Falcons' offensive numbers are skewed by the fact they've had to pass more while trailing in games, but he wasn't about to sell them short.

"They have a great quarterback," Rankins said. And he called Julio Jones "an all-world wide receiver."

"Calvin Ridley's no slouch, their tight end (Austin Hopper) is pretty good," Rankins added. "Any time we've played this team, and any time it's really been a close game, it's usually been because they've been able to be multi-dimensional. They've been able to kind of establish a run game and been able to hit us through there as well. So for us, just like it is every week, make a team one-dimensional and then go from there."

Quinn has struggled all season to understand how his team performs so poorly when he's watched good practices during the week and strong effort in the games. He likes what he's seen this week, too.

"The preparation has been good, but for whatever reason, when you get into the performances and it hasn't been, so that's what we're really looking to aim, but there was a good energy about the team," Quinn said. "A lot of fighters with lots to prove. I anticipate the energy and mindset to be really strong."