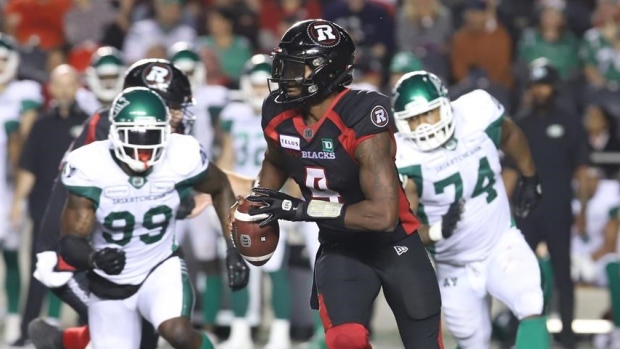 Don't look now, but the Ottawa Redblacks are 2-0.

Many football prognosticators had tempered expectations for the defending East Division champions following a difficult off-season. Quarterback Trevor Harris, offensive lineman SirVincent Rogers and receiver Greg Ellingson (all to Edmonton), running back William Powell and defensive lineman AC Leonard (both to Saskatchewan) and defensive back Rico Murray (to Hamilton) were among the players to leave as free agents.

And although it's still early, Ottawa is tied atop the East Division standings with the Hamilton Tiger-Cats, a team many consider a Grey Cup contender.

Harris and Ellingson are both enjoying solid starts in Edmonton. Harris leads the CFL in passing yards (741) and touchdowns (six) while Ellingson is tops among receivers with 240 yards on 14 catches with two TDs.

But Ottawa's Dominique Davis leads the CFL in pass attempts (83) and completions (59) and is second in yards (630) with three TDs and four interceptions. The picks came in the Redblacks' stunning 32-28 season-opening road win over Calgary.

Davis has run 10 times for 53 yards and three TDs, the scores all coming versus Calgary.

Davis was 30-of-39 passing for 354 yards and three TDs in Ottawa's 44-41 home victory over Saskatchewan on Thursday night. Dominique Rhymes had 11 catches for 168 yards and a touchdown.

Ottawa has a bye week and visits the Winnipeg Blue Bombers on July 5.

Harris and Ellingson have helped stake Edmonton (2-0) atop the West Division standings heading into its intriguing road game Thursday versus Winnipeg (1-0). Calgary (0-1) and B.C. (0-2) meet Saturday at McMahon while Saskatchewan (0-2) hosts Toronto (0-1) on July 1.