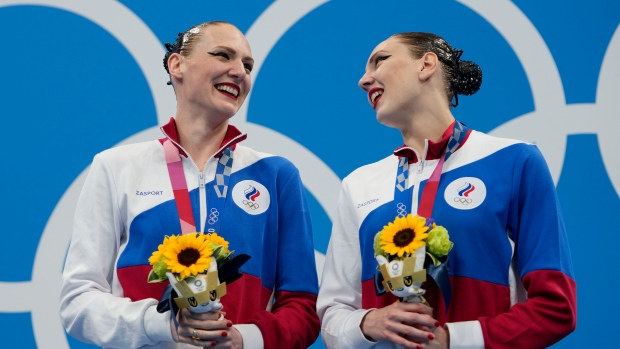 TOKYO (AP) — Standing on the top step of the podium for the seventh time in her perfect Olympic career, Svetlana Romashina took her gold medal and clinked it with teammate Aleksandra Patskevich's newly won hardware.

Kind of like saying “cheers” over a glass of wine.

And why not celebrate?

Romashina has won or been on the winning team of every single event she’s participated in at four Olympics.

Her latest victory came by helping the Russian squad to gold in the artistic swimming team event at the Tokyo Games on Saturday.

The only other athletes who have won at least seven Olympic golds without ever claiming silver or bronze are Jamaican sprinter Usain Bolt and American jumper Ray Ewry, who both won eight golds in track and field.

Romashina teamed with Kolesnichenko to win the duet on Wednesday.

The Russians were heavy favorites in a sport they have dominated for more than two decades. Their last Olympic loss in what was then known as synchronized swimming came at the 1996 Atlanta Games.

Performing to “Parade of Planets” by Denis Gornizov, with planet designs on their swimsuits, ROC was awarded 98.8000 points for the free routine and finished with a total of 196.0979 points after also leading the technical routine.

China finished 2.5669 points behind to take the silver medal and Ukraine was 5.7961 behind for bronze.