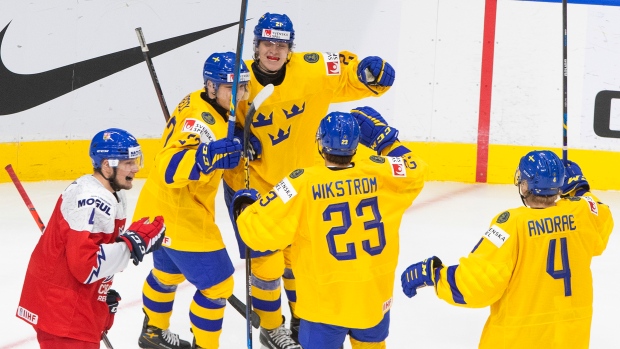 EDMONTON — Sweden extended its win streak to 53 games in the preliminary round of the world junior hockey championship with a 7-1 win over the Czech Republic in the tournament opener for both teams on Saturday.

Jan Mysak opened the scoring for the Czech Republic.

Sweden hasn't lost in the preliminary round in 14 years. But during the streak, Sweden has just one gold medal in 2012.

Sweden finished third last year in the Czech Republic, beating the host team 5-0 in the quarterfinals en route to the bronze medal.

The Czechs play Russia on Sunday, while Sweden faces Austria on Monday.

Canada was to face Germany and the United States was set to tangle with Austria later Saturday.

Dylan Cozens scored a hat-trick, while Dawson Mercer, Philip Tomasino, Alex Newhook and Peyton Krebs each scored two goals as the Canadians ran through an undermanned German squad with a 16-2 victory.

The Canadians were up 11-1 after 40 minutes of play. Soon after, they scored on each of their first five shots of the third period.

Canadian defenceman Braden Schneider was assessed a game misconduct penalty for a hit to the head in the first period.

Team Canada is scheduled to play Slovakia on Sunday, while the Germans will play the Slovakians Monday.

Matthew Boldy scored a hat-trick, while Trevor Zegras added a pair of goals as the United States defeated Austria 11-0. Alex Turcotte also had three assists in the win.

The Americans will next play Tuesday against the Czech Republic while the Austrians will play Sweden Monday.