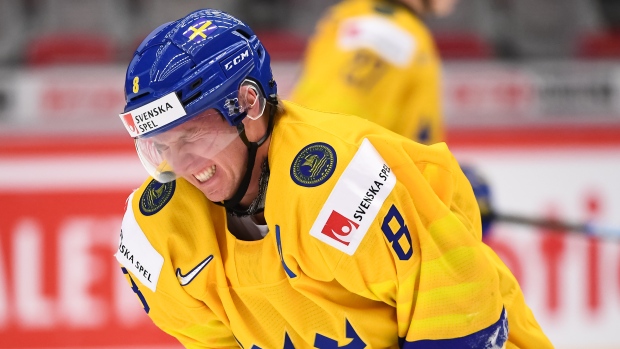 No doubt the Toronto Maple Leafs feel the same way.

The 19-year-old defenceman took another hack to his left wrist — between the glove and elbow pad where there's no padding — in a 5-0 quarterfinal victory over hosts Czech Republic at the world junior hockey championship on Thursday.

The 29th pick in the 2018 NHL draft went straight to the locker room and didn't return in that one, but skated Wednesday and was in the lineup against the tournament hosts.

He was then slashed in almost the exact same spot against the Czechs and remained in the game. Sandin wasn't, however, on the ice for the anthem after the final buzzer and didn't speak to reporters.

Slovakia's Martin Fasko-Rudas was assessed a two-minute penalty for the first slash, but Jan Mysak's swing of the stick went unpunished Thursday.

"He's doing fine," Allenby said. "It's painful, of course. It's in the news. It's impossible to hide that he was slashed there. Right from the beginning of the game we feel that the Czechs were slashing him on the wrist again.

"Our players discussed it with the refs, and it kept going on. We expected it and it happened, and we move on."

Swedish centre David Gustafsson was frustrated to see another blatant attempt to injure.

"It's the second game in a row," said the Winnipeg Jets prospect. "We're leading the game and they just go slashing. It's on our best player, too.

"I'm sick and tired of seeing that."

Head coach Tomas Moten, whose team will take on Russia in one of Saturday's semifinals, was more diplomatic, but decided to keep some of his best players on the bench with the game in hand in the third period.

Allenby said any fingers being pointed at Sandin for not wearing the proper amount of protection isn't warranted.

"Rasmus can decide for himself what gloves he wants to wear," he said. "We can't be playing with 1980s gloves anymore. We'll shield his wrist if we have to. We have (time) to rest him up.

"I don't think it's going to be any problem."

Sandin made his NHL debut with the Leafs on Oct. 2, but was assigned to the Toronto Marlies of the American Hockey League for more seasoning after picking up two assists in six games.

The native of Uppsala had two goals and 12 points in 19 AHL outings before being loaned to his national team for the world juniors.

Sandin registered two goals and two assists at last year's world juniors in Vancouver and Victoria, B.C., where the Swedes were stunned 2-0 in the quarters at the under-20 tournament by Switzerland after dominating the preliminary round.

Moten said his team will have to stick with what's worked so far against the bigger, stronger Russians.

Canada, meanwhile, is set to tangle with defending champions Finland in Saturday's other semifinal.

"We've got to play with speed," Moten said. "We got a good test. We knew the Czechs would play physical on us. We didn't really know if we could handle them, but I think when we got the pace going and we moved the puck, that's our biggest (strength).

This report by The Canadian Press was first published Jan. 2, 2020.