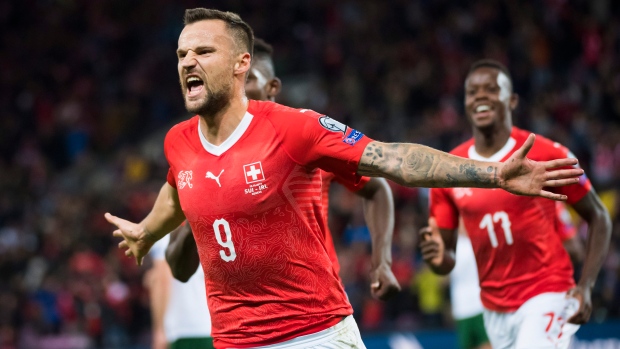 Haris Seferovic gave the Swiss a deserved early lead with a low shot from just outside the area. With the last kick of the game, an own goal by Shane Duffy settled an often testy game on a ragged, rain-soaked Stade de Geneve pitch.

In a three-way fight for two qualifying places, Switzerland remains in third place, one point behind Ireland and Denmark. However, Switzerland and Denmark both have two games left to play next month — including against last-place minnow Gibraltar — while Ireland has only a must-win home clash with the Danes.

"It's winner takes all in that game," Ireland coach Mick McCarthy said of the Nov. 18 meeting in Dublin.

Ireland will be without suspended captain Seamus Coleman who was sent off for a second yellow card Tuesday after conceding a penalty for handball.

Switzerland's 77th-minute spot-kick by Ricardo Rodriguez was saved by Darren Randolph, diving to his left to push the ball against the post.

Randolph was beaten diving to his left in the 16th minute by Seferovic's angled shot.

Ireland struggled to create chances, showing why it is the lowest-scoring team of those currently occupying a qualifying place in the 10 groups.

Only in first-half stoppage time did Ireland first piece together a series of neat passes in attack. The shooting chance created for James Collins then lacked power to test Swiss goalkeeper Yann Sommer.

Ireland must add to its tally of just six goals in seven games against Denmark.

"I would like to have more goals," McCarthy said, but added: "We are still in a position where we can qualify and I am happy enough with that."

Switzerland plays Gibraltar away on Nov. 18, and will also be favoured to first beat Georgia at home.

Whichever team finishes third in Group D gets another chance to advance to Euro 2020 in the playoffs in March.