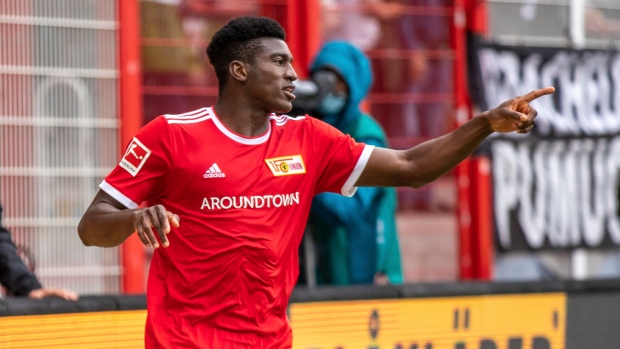 The 24-year-old Awoniyi, whose move on loan from Liverpool to Union was made permanent in the offseason, combined with Max Kruse to score what proved to be the winning goal in the 41st minute.

“I feel good, but the most important thing is the team,” said Awoniyi, who has now scored in each of Union’s opening three games. Union drew with Bayer Leverkusen 1-1, then 2-2 at Hoffenheim.

Awoniyi joined Liverpool in 2015 but never played for the Premier League club, going out on loan spells to clubs in Germany, the Netherlands and Belgium before his loan last season at Union. He scored five goals in 21 Bundesliga appearances for Urs Fischer's team last season.

“He's getting better and better,” former Germany striker Kruse said. “His development was very, very good last year, even if not everything went to plan. Lately, lots of things are really working out, so we shouldn't be surprised if it starts going the other way again. But he works hard. He really fights, uses his strength. And of course he's so fast that you try to use it.”

Union, which is playing in its third season in Germany's top flight, stretched its unbeaten run at home in the Bundesliga to 18 games (nine wins, nine draws) with the victory over Gladbach.

The Köpenick-based team had five new signings in its starting lineup with Leven Öztunali, Paul Jaeckel, Rani Khedira, Genki Haraguchi and Timo Baumgartl – all signed in the offseason among others to make up for the departures of Robert Andrich, Nico Schlotterbeck, Christian Gentner, Petar Musa and Joel Pohjanpalo.

A mistake from Gladbach defender Louis Jordan Beyer led to the opening goal. Beyer lost the ball to Kruse and Haraguchi produced a pin-point cross for Niko Gießelmann to score with a header in the 22nd.

Gladbach tried to respond but was caught on a counterattack when Awoniyi surged forward. Facing three defenders, Awoniyi passed to Kruse and ran through for the weighted return, taking the ball past Yann Sommer with his first touch before slotting in with his next.

“He’s just an exceptional player,” Awoniyi said of Kruse, who was playing against his former club. The now 33-year-old striker scored 23 goals in 66 league games for Gladbach between 2013-15.

“He has a lot of experience in the game. He knows everything he wants to do every time he has the ball,” Awoniyi said. “Once you play with him, he knows where you are, you know where he is, and I think this has helped me to learn a lot… it’s good for both of us at the moment.”

Gladbach didn’t look much like mounting a comeback until Jonas Hofmann scored off a rebound in injury time. Andreas Luthe had saved Laszlo Benes’ shot but couldn’t secure the ball before Hofmann got to it.

Patrick Herrmann then hit the side netting. It was close as Gladbach got to an equalizer as it slumped to its second successive defeat. Adi Hütter’s team lost 4-0 to Bayer Leverkusen last weekend.