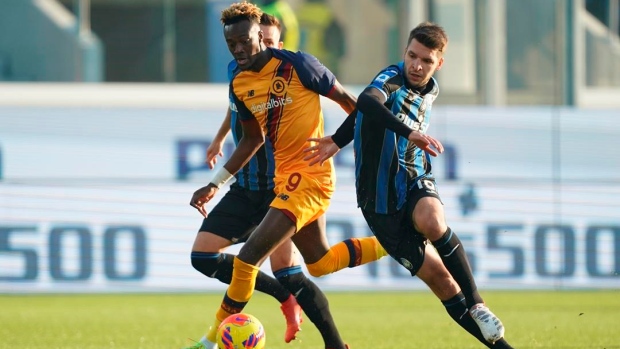 MILAN (AP) — Tammy Abraham scored twice as Roma claimed its first win against one of the top Serie A teams by 4-1 at Atalanta on Saturday.

Abraham scored his first less than a minute into the match and Nicolò Zaniolo doubled Roma’s lead. An own goal from Bryan Cristante made it 2-1 at the end of the first half.

Cristante had another own goal ruled out shortly before Chris Smalling all but secured the win in the 72nd minute. Abraham capped a brilliant match for Roma 10 minutes later.

“A lot of people doubted us today, they said it was mission impossible for us as a team, but this is by far one of the best wins we’ve had this season. You can see by everyone’s reaction."

Juventus was below Roma on goal difference alone after winning at Bologna 2-0. Head-to-head is the first tiebreaker in Serie A at the end of the season.

Roma had not beaten one of the top four teams in the Italian league, having lost to Inter Milan and AC Milan and drawn against Napoli.

But José Mourinho’s side got off to the perfect start as Abraham shrugged off Berat Djimsiti and his effort was deflected in after just 55 seconds.

Roma doubled its lead with another counterattack in the 27th minute. Zaniolo back-heeled a ball to Jordan Veretout and then raced forward before receiving it back from the Frenchman and firing into the bottom left corner.

Roma goalkeeper Rui Patrício made a couple of fantastic saves but Atalanta got back into the match on the stroke of halftime when Luis Muriel’s effort went in off Cristante.

The Roma midfielder thought he had the misfortune to score another own goal in the 68th when Duván Zapata’s effort came off him but it was ruled out for offside.

Moments later, Roma all but sealed the result when Smalling volleyed in a Veretout free kick at the far post.

Veretout was again involved in Roma’s fourth, pulling the ball back for Abraham to fire into the far side of the net eight minutes from time.

Álvaro Morata and Juan Cuadrado scored as Juventus ground out an unconvincing result in the fog against Bologna.

After a surprise draw at Venezia, Juventus needed a good result and things appeared to be going to plan when it took the lead in the sixth minute. Morata raced from near the halfway line before laying it off to Federico Bernardeschi, who threaded it through for the Spaniard to blast into the top right corner.

But after that positive start, Juventus did little but defend and Bologna threatened several times to equalize -- notably with an overhead kick from Mattias Svanberg that flew just past the left post.

Juve’s second came out of nowhere in the 69th, when a powerful effort from Cuadrado was deflected into the far top corner.

Gabriele Cioffi’s impressive start to his Serie A coaching career continued as he steered Udinese to a 4-0 win at 10-man Cagliari.

Cioffi replaced Luca Gotti as coach at the beginning of the month and is unbeaten. Udinese moved 10 points above the drop zone.