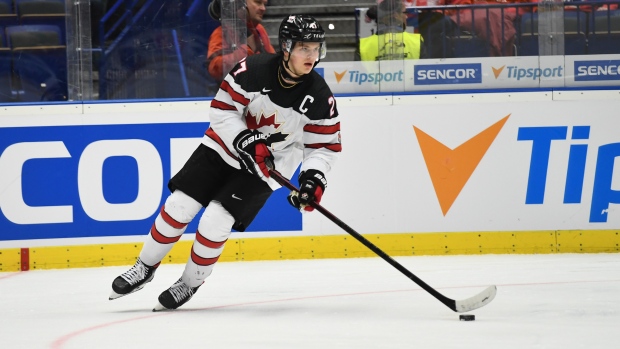 Team Canada captain Barrett Hayton left the World Juniors semifinal against Finland and went to the team's dressing room early in the third period after appearing to get injured colliding into the end boards. According to TSN Senior Hockey Reporter Frank Seravalli, Hayton seems like a longshot to play in Sunday's gold medal game.

Sounds like outlook on Canada 🇨🇦 captain Barrett Hayton’s injury is not positive. He hasn’t been ruled out and team plans to reevaluate in the morning, but the belief going to bed Sat night was that Hayton is a bit of a long shot to play in the gold medal game. #WorldJuniors

"The initial outlook that Team Canada received from doctors on Saturday night was not encouraging for Barrett Hayton," said Seravalli. "Now the potential positive news is there is still a chance. Team Canada did not rule out Barrett Hayton for Sunday's gold medal game. And in addition to that, they were hoping re-evaluate him on Sunday morning and see if he can go. But at this point it probably seems like he is a longshot and that's the eventuality that Canada is preparing for."

Hayton collided into the boards after getting tangled up with a Finnish player as the two were racing for the puck.

Hayton skated off the ice on his own but appeared to be holding his left arm. He sat on the bench briefly before heading to the dressing room.

"He's being evaluated now. We don't know. for sure."