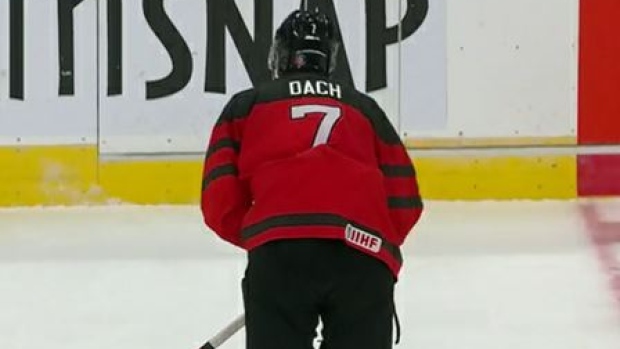 Captain Kirby Dach left for the dressing room in the third period of Canada's 1-0 pre-competition win against Russia Wednesday night after committing an awkward hit on a Russian player.

Dach, a 19-year-old forward who was selected third overall by the Chicago Blackhawks in the 2019 NHL Entry Draft, appeared to injure his right arm or wrist after delivering the hit on Russian centre Ilya Safonov in the neutral zone. He immediately took his glove off before heading for the dressing room.

Canada's captain, Kirby Dach, left the ice and went straight to the dressing room after this play. pic.twitter.com/ZEzfG66aad

Following the game there was no update from head coach André Tourigny regarding Dach's status, saying more X-rays are needed. The X-rays were done inside the bubble and Dach did not have to be taken out of it.

No update from Tourigny on Dach. Says more X-rays are needed.

The X-rays Dach had tonight were done within the bubble, he didn’t need to be taken out of it. No update from Hockey Canada on results.