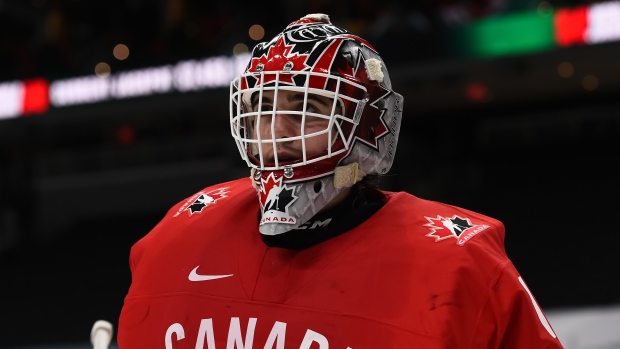 Levi, Pasquale and Tomkins will handle goaltending for Team Canada at the Olympics. Also, clarification on Kent Johnson. Johnson is listed as an alternate going into camp, but could make the team if there’s an injury or Covid hits.

Team Canada will take its time submitting its final roster to ensure there are no injuries and the team is CoVid free. https://t.co/s2jZFu5tHQ

Dreger adds that Team Canada will take its time submitting the final roster to ensure there are no injuries and the team is COVID-19 free.

One name that could accompany Canada to Beijing is No. 5 overall pick Kent Johnson, who is currently listed as an alternate going into camp. Dreger tweets that Johnson could make the team if there is an injury or a COVID situation.

The 19-year-old Columbus Blue Jackets product currently plays at the University of Michigan and has six goals and 24 assists for 30 points in 23 games so far this season.

Levi, 20, has a goals-against average of 1.55 and a save percentage of .948 in 24 games for Northeastern University. Levi was selected in the seventh round (No. 212 overall) in the 2020 NHL Draft by the Florida Panthers.

Pasquale has spent the last three seasons in the Kontinental Hockey League and owns a GAA of 1.99 and a .916 save percentage in 38 games for Yaroslavl Lokomotiv. The 31-year-old has three games of NHL experience with the Tampa Bay Lightning during the 2018-19 campaign.

Tomkins, 27, is a member of Frolunda HC in the Swedish league. The former Chicago Blackhawks draft pick has a .913 save percentage and 2.32 GAA in 23 games this season.

Last month, it was decided between the NHL Players' Association and league that NHL players would not attend the 2022 Games because of a surge in COVID-19 cases and multitude of postponed games. Both sides had originally negotiated Olympic participation in Beijing in their latest collective bargaining agreement but now say the focus is on sending players to the Milano Cortina Games in 2026.

The International Ice Hockey Federation said earlier this month that individual NHLers would not be accepted into Olympic participation on their own accord.

The Beijing Olympics are slated to open on Feb. 4 and run through Feb. 20.