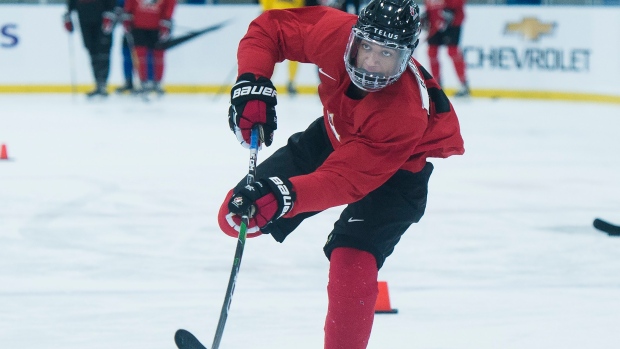 TSN Toronto reporter Mark Masters checks in daily with news and notes on Team Canada, which held two practices on Tuesday at the Sixteen Mile Sports Complex in Oakville, Ont.

It wasn't an easy path to Canada's World Junior camp for Quinton Byfield.

On the ice he clearly earned an invitation with 57 points in 30 OHL games with the Wolves, but off the ice the trip from Sudbury was far from smooth. His flight was delayed more than seven hours on Monday before finally being cancelled.

"Just listening to music, just looking outside and hoping the plane would take off," he said of the marathon travel day. "It was getting lonely."

Luckily his billet, Rick Waugh​, was available and offered to drive him four and a half hours to Oakville. They arrived around 10:30 pm and Byfield went straight to bed.

"You're kind of excited and you want to get everything going and just missing that first day definitely puts you behind," Byfield said, "but I’m here now and excited to get going."

With only four days to impress, every second counts at camp and expectations for Byfield are sky high.

"He's a big player who skates really well with tremendous hands and he works extremely hard," noted Hockey Canada head scout Brad McEwen. "It's really an intriguing package ... you're going to see a player who has so much upside in his game and whether it's now or later we haven’t made that decision yet, but he's going to come in and certainly put his stamp on the camp, I'm sure."

Byfield has only been held off the scoresheet in three of 30 games this season.

"He's an ox," said Flint centre Ty Dellandrea, "that’s the best way to describe him. He’s strong on the puck and he's got it all. It’s hard to play a guy that's so tall and uses his body so well, but can also finish and has got the hands."

The six-foot-four, 215-pounder from Newmarket, Ont., is a force on the ice with TSN director of scouting Craig Button comparing his hands to Pittsburgh's Evgeni Malkin. Sometimes it takes a young player time to learn how to use his size, but Byfield already has a pretty good sense of how he can impose his will on a game.

"Well, he's had a pretty good year this year by using (his size)," said Hockey Canada management group member Mark Hunter with a chuckle. "Yeah, he's gaining momentum on that (and) he's gotten better from the start of the year. He's put up some impressive points so we figure big things here for the next couple days."

And despite being big, Byfield is also elusive.

"I know in our pre-scouts we always (say), 'Try to shutdown 55,'" revealed Peterborough goalie Hunter Jones. "Very athletic player, knows how to get around the ice, kind of gets lost in the offensive zone and then somehow gets the puck and then it’s in the back of the net."

How is it possible for a guy his size to get lost?

"I honestly have no clue," Jones says with a smile. "He just finds a way."

Byfield has a good chance to find his way onto Canada's roster despite being just 17 much like Alexis Lafrenière did last year. The pair, both sitting atop most draft boards, haven't had many conversations at the camp, but Byfield holds the Rimouski winger in high regard.

"He seems really nice," said Byfield. "I want to follow in those footsteps. Hopefully I can make the team ... he definitely is motivation for me to make it."​

For the second straight day, Lafrenière stayed off the ice.

"He just needs a few days off here," said Mark Hunter, "just some maintenance time just to rejuvenate, just a couple bumps and bruises to clear up."

Per TSN's Bob McKenzie, Lafrenière is resting a nagging ankle injury, which also kept him out of the QMJHL games in the CIBC Canada/Russia series. The injury is not considered overly serious and should​n't jeopardize the 18-year-old's participation in the tournament.

The ankle issue has not slowed Lafrenière's production as ​he has a whopping 70 points in 32 games this season. He ​had 10 points in his final three games before joining Canada's camp.

Alexis Lafreniere is day to day this week at the Team CAN evaluation camp but there is no reason to believe it’s anything serious or something that would keep him off the team. That said, I’d be surprised if he plays in games vs. @USPORTSca Wednesday and Thursday.

"It's been a long journey," the Winnipeg Ice forward said. "It's actually six months today since my injury and it's been a long grind, but I’m happy to be here and be able to tryout, it’s pretty exciting for me ... This was definitely a goal of mine to be back for here."

That injury was a partially torn Achilles sustained in a training session. It's not a normal hockey injury and getting back in time for this opportunity was never a guarantee.

"I wasn't really sure of a timeline," said Krebs, who was picked in the first round (17th) by the Vegas Golden Knights at June's draft. "I've never had this injury and I've never heard too many guys have it before and every guy that I talked to had a different timeline."

Krebs said the mental grind was the toughest part of his recovery as the days slipped by and his friends and teammates got back to work. But he was able to find inspiration through conversations with some notable NHL figures, including Kevin ​Bieksa, who had his Achilles almost completely severed by a skate blade back in 2007.

"I was at the rookie tournament in the Anaheim and Bieksa was there and he had it done and walked me through his injury and that was kind of cool to have another guy who went through my injury," Krebs said.

Krebs lived with Mark Stone in Vegas during the rehab process and the Golden Knights winger shared an inspiring story about a certain former teammate in Ottawa.

"Erik Karlsson played on his team and had that same injury so some guys excelled pretty quick (after recovering) and it was definitely motivating for me to see they did that and know I could come back also."

"It’s taken some time, for sure," he said of getting back in the swing of things, "I mean, the first three games are all over the place, but once you get in a groove and start to move forward it gets better every day and I’m feeling better."

As for the six-month anniversary of the injury falling on the same day as Canada's camp opening, well, Krebs sees that as a good omen.

"That's a good sign. It's pretty crazy to think about that. It feels like it was a long time, but being here now it feels pretty short."

Dawson Mercer wasn't invited by Hockey Canada to take part in the Summer Showcase for World Junior hopefuls, but took the snub in stride.

"I would've wished to be there and have the opportunity there, but I didn't let that slow me down," the Drummondville forward said. "I came back with the mindset that the opportunity was still here and to make sure I could get here for the final camp and that’s what I did well and that's why I'm here now."

Mercer quickly scored his way into contention with 18 goals in 26 QMJHL games, but saved his best for when Team Canada's staff was watching the closest. Mercer scored twice and added an assist in the two QMJHL series games against Russia.

"I felt I kept consistency from my season," Mercer said. "I didn’t want to change my game. I feel I play a complete, 200-foot game, that’s what I want to do, I want to take care of my details."

Mercer hails from the small town of Bay Roberts on the north shore of Conception Bay in Newfoundland. The population, per the 2016 census, is just over 7,000. And many of those people are making sure Mercer feels the love from his hometown.

"I'm getting a lot of support from them," he said with a smile. "I'm getting calls and texts all the time from them so I appreciate them reaching out, because those are the people I grew up with and now I'm making my procedure farther and farther away from (home), but they always have my back."

Spokane defenceman Ty Smith was feeling under the weather and missed the second practice on Tuesday.

For the second straight day, Owen Sound's Aidan Dudas skated on his own as he recovers from a hand injury.