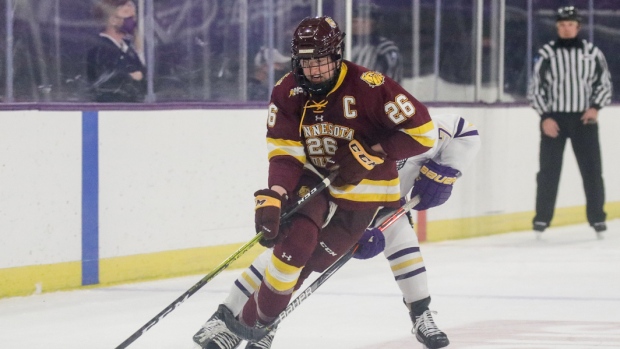 Three Canadians currently in the NCAA will be making their world championship debut, including Ashton Bell.

“Ashton is a great player,” head coach Troy Ryan told TSN last month. “I had the privilege of coaching her at the U18 World Championship for Canada. She previously was a forward, so she’s just transitioning from a forward to a D. With that, you have to give players time to adjust, and Ashton’s done a great job adjusting. She has a big presence, plays the game the right way, good body posture, good point shot. She’s fun to work with right now.”

As Ryan mentioned, Bell started her career as a forward, playing for the Westman Wildcats in the Manitoba Female Midget Hockey League (MFMHL) and was named league MVP in both 2015-16 and 2016-17. In the latter season, she led the league in scoring with 31 goals and 49 points in 22 games.

Like many of her current teammates, Bell was a multisport athlete growing up, although her other main hobby was a little more unusual, as she took part in high school rodeos.

Bell competed in the Manitoba High School Rodeo Association in events like barrel racing, pole bending, goat tying and breakaway roping, in which she once qualified for nationals.

Bell won a silver medal with Canada’s under-18 team at the 2016 IIHF U18 Women’s World Championship, where she led the team in scoring with six points in five games and was named to the tournament all-star team.

The following year, she was named captain of the Canadian under-18 squad and led the team to another silver medal.

Bell joined the University of Minnesota-Duluth in 2017-18, recording 11 goals and 23 points in her rookie season, good for second in team scoring. In her sophomore year, she was named a WCHA Scholar Athlete and was also a WCHA All-Academic Team honouree.

But Bell’s breakout year came as a junior when she was moved to the blueline. She led all WCHA defencemen with 32 points in 36 games and was named to the All-WCHA First Team.

This past season, Bell captained the Bulldogs to their first NCAA Frozen Four appearance in over a decade. She earned All-American honours and finished seventh in the nation in scoring by defencemen with 14 points in 19 games.

Bell also spent time with Canada’s development team, finishing fifth with the squad at the 2018 Nations Cup. Earlier this year, she was named to the Canadian Olympic centralization roster.

“It’s been awesome so far. The older girls have been great showing us the ropes and answering any questions we have,” she said. “I have definitely looked up to a lot of these girls growing up and watching them compete at Olympics. Jocelyne Larocque and Renata Fast have been awesome with me, just helping me out and, if I have any questions, just being open to answer them for me.”