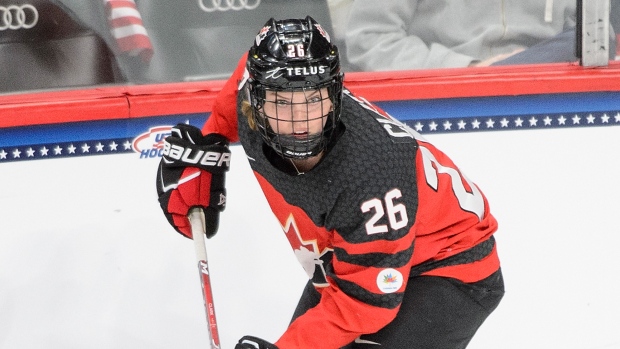 Despite being only 25, Emily Clark has already put together an impressive resume so far in her career.

Starting in 2009-10, she spent three seasons with the Saskatoon Stars of the Saskatchewan Female Midget AAA Hockey League. Clark would become an alternate captain in 2011-12 and lead the team in scoring with 26 goals and 60 points in 26 games.

In 2012, Clark made her international debut for Canada at the IIHF Women’s World U18 Championship with four points in five games as they captured gold.

She spent the 2012-13 season with Okanagan Hockey Academy U18 Prep of the Junior Women’s Hockey League, where she led the team in scoring with 15 goals and 38 points in 29 games.

The Saskatoon, Sask., native also participated in the World Women’s U18s for the second time in 2013 and took home gold again with five points in five games while wearing an ‘A’ for Canada.

Clark returned to Okanagan Hockey Academy for the 2013-14 season and led the team in scoring again with 19 goals and 31 points in 28 games.

The 2014-15 season saw Clark kick off her NCAA career with her first year at the University of Wisconsin. As a rookie, she netted 12 goals and 27 points in 36 games. She had two goals and an assist in her college hockey debut on Oct. 3, 2014 against the Minnestoa-Duluth Bulldogs.

In 2015, Clark made her Women’s Worlds debut, recording a goal and an assist in five games in another silver medal effort for Canada.

In her sophomore year at Wisconsin in 2015-16, Clark scored a career-high 24 goals and netted 45 points in 38 games, second only to Annie Pankowski’s 58 on the Badgers’ scoring list that season.

Appearing in her second Women’s World Championship in 2016, Clark had one goal in five games as Canada took home silver.

While the 2017 Women’s Worlds ended in another silver for Canada, Clark was named a top-3 player on the team with two goals in five games.

In 2017-18, she centralized with Team Canada ahead of the 2018 PyeongChang Olympics. Making the Olympic roster for the first time in her career, Clark had one goal in five games as Canada took home silver after losing the gold-medal game 3-2 in the shootout against the United States.

Clark returned to Wisconsin in 2018-19 and, wearing an ‘A’ for the first time in college, she had 14 goals and 28 points in 34 games and capped off her NCAA career with a national championship alongside future Team Canada teammate goaltender Kristen Campbell.

At the 2019 Women’s Worlds, Canada failed to advance to the championship game for the first time in tournament history as they settled for bronze over Russia. Clark had two goals in seven games.

After her NCAA career ended, Clark joined the Professional Women’s Hockey Players Association. She has spent the last two PWHPA seasons playing for the Montreal hub. Clark was a part of Montreal’s Team Bauer that captured the 2021 Secret Cup in Calgary in May in a win over Toronto’s Team Sonnet.

“I haven’t seen a work ethic on a player like her before,” Clark’s skills coach Scott Dutertre said in an interview with CTV News. “Ever since she was a little kid it was always about setting goals and getting incrementally better.”

Like some of her other Team Canada teammates, Clark has also jumped into coaching, having been an assistant coach the last two seasons at Concordia University.