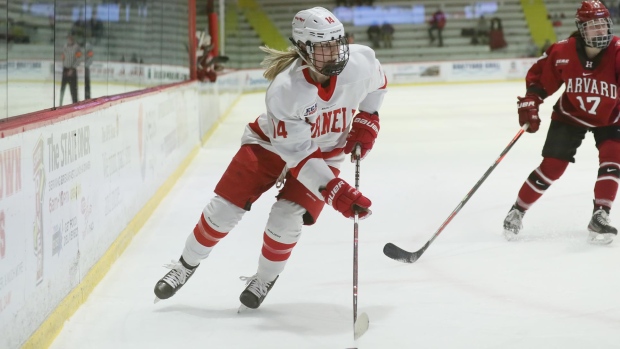 One of Canada’s brightest young stars on the blue line, Jaime Bourbonnais may only have a handful of games under her belt with the Canadian national team, but her talent has been on display for years.

Bourbonnais grew up playing for Mississauga in the Greater Toronto Hockey League, winning the GTHL championship three years in a row from 2009 to 2011, including with the Peewee AA boys team in 2011.

Bourbonnais then moved to the Oakville Hornets in the Provincial Women’s Hockey League (PWHL). In 2015, she won gold with the Hornets at the Ontario Women’s Hockey Association (OWHA) provincials (intermediate AA), as well as bronze at the PWHL championship.  A year later, she medalled again, taking home silver at the OWHA provincials.

While playing for Ontario, Bourbonnais won silver at the 2015 Canada Winter Games in Prince George, B.C.  That same year, she and Ontario Red took home gold at the National Women’s Under-18 Championship, and Bourbonnais also earned Top Defenceman honours.

After making her debut with Canada’s under-18 team in 2015, Bourbonnais earned silver with the squad at the 2016 IIHF Under-18 Women’s World Championship in St. Catharines, Ont.  She picked up two goals in the tournament, including a marker in the gold-medal game, which the Americans won 3-2 in overtime.

Bourbonnais then chose Cornell University for her collegiate team, citing the number of Canadians who had played for the Big Red, including Laura Fortino, Rebecca Johnston and Jill Saulnier, as a major motivation.

“The fact that so many Cornellians play for Team Canada was a big reason why I chose to go to Cornell,” she told Women’s Hockey Life. “It really proved to me how amazing the coaching staff is at Cornell, and I felt it would be a great place for me to go if I wanted a chance to play for the national team one day.”

In her first season, she was named to the ECAC All-Rookie team and helped Cornell reach the quarter-finals of the NCAA tournament. The following year, she led all Big Red defencemen in scoring and was named to the Ivy League First All-Star Team.

But Bourbonnais really started to find success in her final two years at Cornell. In the 2018-19 season, she ranked third among NCAA defencemen in points per game (0.94), won ECAC Defenceman of the Year, and helped Cornell reach the Frozen Four.

In her senior year, Bourbonnais raised her points per game to 1.24, second most in the NCAA among defencemen. She finished tied for the team lead with 41 points, won ECAC Defenceman of the Year once again, and was a top-10 finalist for the Patty Kazmaier Award, given annually to the best collegiate women’s hockey player.

While at Cornell, Bourbonnais also spent time with Canada’s development team, winning silver with the squad at the 2017 Nations Cup, and she also captained the team for a three-game series against the United States in 2019.

She made her debut with the senior squad at the 2018 Four Nations Cup and scored her first goal with the national team in the gold-medal match, which Canada lost 5-2 to the Americans. The following year, she made her women’s worlds debut at the 2019 IIHF Women’s World Championship, picking up a goal in Canada’s 7-0 win over Russia in the bronze-medal match.

Bourbonnais was named to the roster for the 2020 women’s worlds that was cancelled due to COVID-19. She did feature in two of the games in the Rivalry Series against the Americans at the end of the year, picking up an assist.

After college, Bourbonnais elected to join the PWHPA, which was formed in 2019 in an effort to create a viable women’s professional hockey league in North America.

She currently plays for Team Bauer in the Montreal region of the PWHPA. During this year’s Dream Gap Tour in Calgary, she recorded two assists in five games and helped her team win the championship game.

Bourbonnais’s grandfather, Roger, captained Canada’s men’s team at both the 1964 and 1968 Olympics, winning bronze at the 1968 Grenoble Winter Games in France. He also won two more medals at the IIHF World Championships and was inducted into the IIHF Hall of Fame.

Bourbonnais told hockeycanada.ca in 2014 that she does have a superstition when it comes to her grandfather’s mementos.

“I’m not going to touch an Olympic medal until it’s mine,” she said. “He’s showed it to me, but I’ve never touched it.”