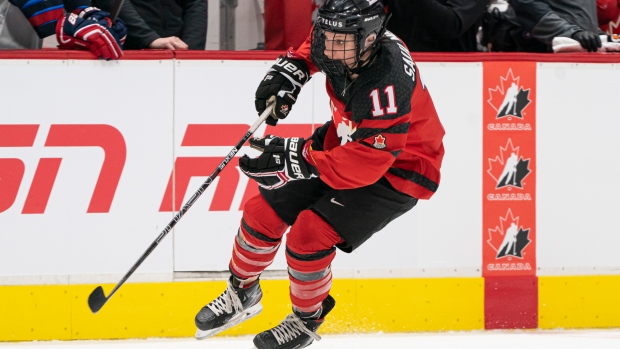 Along with teammate Blayre Turnbull, Saulnier was one of the first two women from Nova Scotia to ever play for the Canadian women’s hockey team when she made her debut in 2014.

Saulnier started playing hockey when she was five. She represented Nova Scotia at five Atlantic Challenge Cups from 2003 to 2008, winning three golds and two silvers. She also represented her province at the 2007 Esso Women’s Nationals, finishing fourth.

She was captain and team MVP of the Halifax Hawks (Midget AAA) in 2006-07 and won gold with the team at Nova Scotia provincials in 2006.

Saulnier competed as a member of Team Atlantic at the National Women’s Under-18 Championship from 2007 to 2009. In the 2008 edition of the tournament, she was captain of the team and named Most Sportsmanlike Player.

She then made the journey to Ontario and won silver with Stoney Creek at the Ontario Women’s Hockey Association (OWHA) provincials in 2009. Saulnier joined the Toronto Aeros the following season and won a gold and a silver at the OWHA provincials (Intermediate AA) in 2010 and 2011, respectively.

As captain of the team in 2011, she led Toronto to the Provincial Women’s Hockey League championship, avenging the team’s silver medal result in the previous season.

Saulnier first played for Canada at the under-18 level, winning both silver and gold at the IIHF U18 Women’s World Championship in 2009 and 2010, respectively. In 2010, she was the fourth-highest scorer in the tournament with 10 points in five games and she helped lead Canada to its first world title at the under-18 level.

As a junior, she led Cornell in goals (28), assists (28) and points (56) and had the best points per game in the nation with 1.65. She was a top-three finalist for the Patty Kazmaier Award, given annually to the best collegiate player in women’s hockey. She earned All-American first team honours and was a co-recipient for Ivy League Player of the Year.

After spending time with the Canadian under-22 and development team, Saulnier made her debut with the senior squad at the 2014 4 Nations Cup, scoring in her inaugural game against Sweden. Canada would go on to capture gold in the tournament.

She has played in three world championships, winning two silvers and a bronze and also brought home silver at the 2018 Olympics.

Saulnier was selected 14th overall by the Calgary Inferno in the 2015 CWHL Draft. In her rookie year, she finished third in Calgary scoring with 22 points and helped lead the Inferno to the Clarkson Cup. She would reach the Cup final again the following season but lost to Montreal.

Saulnier missed the 2017-18 season while being centralized for the Olympics. Before the 2018-19 season, she was traded to Montreal, where she once again reached the Cup final, but was defeated by her old team in Calgary. That was her final year in the CWHL after the league ceased operations in 2019.

She was named a CWHL All-Star in all three seasons she played and netted a hat trick in the 2017 edition of the game.

After the league folded, Saulnier joined the PWHPA in an effort to form a viable professional women’s hockey league in North America. She currently plays for Team Bauer in Montreal.

The 2021 IIHF Women’s World Championship was originally scheduled to take place in Saulnier’s home province of Nova Scotia in May before the provincial government cancelled the event just two weeks before the tournament was set to start.

Saulnier was outspoken about the cancellation on social media, writing, in part:

“I wasn’t going to vocalize how I felt this morning, but as female athletes, we need to have a voice… I love this province, but I am so disappointed in the decision to rob us of this dream.”