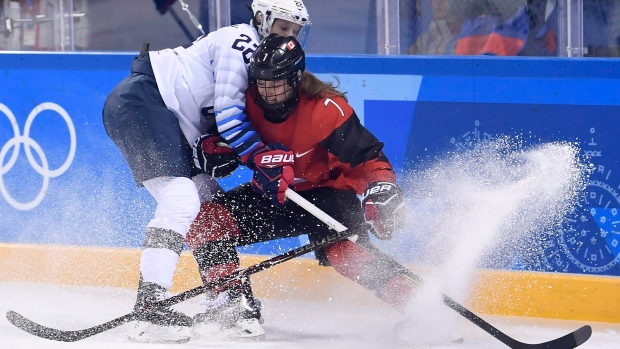 Laura Stacey has an impressive resume on her own, with two world championship medals and an Olympic silver, but it also doesn’t hurt that she has a hockey pedigree as the great-granddaughter of Hall of Famer King Clancy.

She wears No. 7 in honour of Clancy, whose number hangs in the rafters at Scotiabank Arena in Toronto.

"Growing up with a role model like him to look up to definitely gives you motivation," Stacey told CBC in 2017. "I want to continue his legacy."

Stacey started playing hockey at the age of four, featuring for various teams in the Greater Toronto Area. She won several Esso Medals of Achievement with Vaughan in 1999-00, 2000-01 and 2002-03.

In 2007, she took home a silver medal with the Toronto Redwings at the Ontario Women’s Hockey Association (OWHA) provincials (Bantam A). Two years later, she was named to the OWHA all-star team for a game against Canada’s women’s under-18 team.

Stacey continued to enjoy success leading up to her collegiate career. In her 2009-10 season with the Aurora Panthers (Intermediate AA), she was second in team scoring and was named to the Provincial Women’s Hockey League (PWHL) all-star team. She also won a silver medal with Ontario Blue at the 2009 National Women’s Under-18 Championship.

The following season, Stacey was second in scoring for her Toronto club and helped lead the team to gold at the PWHL championship as well as silver at the OWHA provincials (Intermediate AA). She also featured for Ontario at the 2011 Canada Winter Games, where the team finished second.

In 2011-12, Stacey brought home more hardware with the Toronto Aeros: a silver at both OWHA provincials (Intermediate AA) and the PWHL championship, as well as the PWHL regular season crown. She led her team in scoring that year, second overall in the PWHL, and also captured gold with Ontario Red at the 2011 National Women’s Under-18 Championship.

It was during this time that Stacey first caught the eye of Hockey Canada. She won both a silver and gold medal at the IIHF Under-18 Women’s World Championship in 2011 and 2012, respectively. In the 2012 tournament, Stacey was tied for the team lead with seven points in five games.

During her collegiate career, Stacey also spent time with Canada’s under-22 and development teams, winning two golds and a silver at the Nations Cup from 2015 to 2017.

She was cut from the senior team for four consecutive years before finally making her women’s worlds debut at the 2017 IIHF Women’s World Championship, where the team took home silver. Stacey also earned a bronze medal at the 2019 world championship, recording a goal in the quarter-final win over Germany.

Following her tenure at Dartmouth, Stacey was selected third overall by the Brampton Thunder in the 2016 CWHL Draft. In her first season, she was named CWHL Rookie of the Year and an all-star after finishing with 24 points in 20 games.

The following year, Stacey missed most of the season while being away for Canada’s Olympic centralization camp in Calgary. She represented her country at the 2018 Olympics in PyeongChang and, at 23, was one of the youngest members of the team.

After winning silver at the PyeongChang Games, Stacey returned to her club (now relocated to Markham, Ont.) and scored the game-winning goal in overtime to give the Thunder its first-ever Clarkson Cup victory.

She was once again named an all-star in 2018-19 with 25 points in 24 games. It would be her final season with the team after the CWHL ceased operations in 2019.

After the league folded, Stacey and many of her Canadian teammates joined the PWHPA in an effort to form a viable professional women’s hockey league in North America. She currently plays for Team Bauer in Montreal.

In this year’s Dream Gap Tour showcase in Calgary, Stacey finished with two goals and two assists in five games, helping lead her team to a win in the championship game.

At 5-foot-10, Stacey is tied with Natalie Spooner as the tallest player on the Canadian team, and she has always tried to use her physical attributes to her advantage.

“My size and my speed are things I’ve been fortunate to be given,” she told The Hockey News in 2019. “Having that longer reach and that bigger frame for driving the net and creating chaos – I do try my best to use that to my advantage.”

In 2018, Stacey started the LS7 Sticks in for Charity Road Hockey Tournament. In its inaugural year, all proceeds went to support Our Lady of Sorrows, an elementary school in Stacey’s family neighbourhood, in an effort to have more children active in sports.

When the COVID-19 pandemic forced the tournament to be cancelled in 2020, the charity instead donated over 500 medical masks to Toronto’s Sick Kids Hospital.