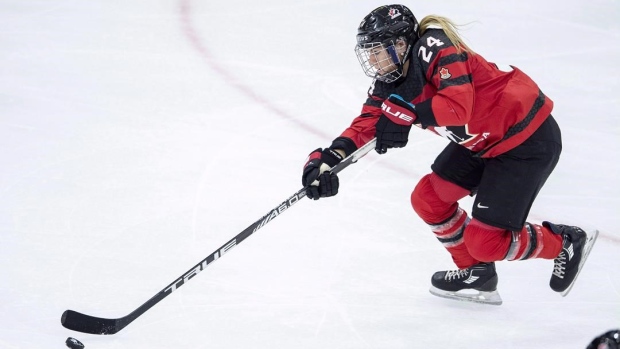 Natalie Spooner has been one of the most prominent faces in women’s hockey for almost a decade. She is a two-time Olympic medallist, a seven-time world championship medallist, a Clarkson Cup champion, and is currently tied for 15th on Canada’s all-time scoring list with 55 goals and 93 points.

Spooner grew up in Scarborough, Ont., and began playing hockey at the age of four. She started playing with boys before switching to the Durham West Lightning Girls Hockey Association, where she remained for 12 seasons. Spooner led the Provincial Women’s Hockey League (PWHL) in goals in 2006-07 and won gold with Durham at the 2007 PWHL Championship.

She also had success as a teenager with various Ontario teams. In 2005, she won gold with Ontario Red at the National Women’s Under-18 Championship. Two years later, she captained the team to another championship despite breaking her jaw prior to the tournament after blocking a shot during a game with Durham.

Spooner would add more gold to her resume, taking home the top prize with Ontario at the 2007 Canada Winter Games as well as with the Mississauga Chiefs at the 2008 Esso Women’s Nationals.

In 2007, she earned her first call-up to Canada’s under-18 team, winning silver with the squad at the 2008 IIHF U18 Women’s World Championship. That same year, she also featured for Canada’s under-22 squad, and won silver with the senior team at the Four Nations Cup, becoming the first woman to ever play for Canada’s national team, under-22 team, and under-18 team in the same year.

Spooner spent four seasons with Ohio State from 2008 to 2012. She is the only 100-goal scorer in team history and amassed 163 points over her career, the second-most in school history. In her senior year, Spooner was a top-10 finalist for the Patty Kazmaier Award, given to the NCAA’s best women’s hockey player, and was also named an NCAA First Team All-American.

Spooner scored her first goal for the Canadian senior team in 2010 and quickly added two more as she netted a hat trick against Sweden at the Four Nations Cup. Canada would go on to claim gold in the tournament, with Spooner finishing with four goals.

She made her women’s worlds debut at the 2011 IIHF Women’s World Championship, helping the team win silver, and the following year she won her first gold. Spooner recorded another hat trick in that tournament in a 14-1 win over Russia in the preliminary round.

Spooner was selected seventh overall by her hometown Toronto Furies in the 2012 CWHL draft and reached the Clarkson Cup final in her rookie season. She missed most of the following season after she was centralized with Canada in Calgary for the 2014 Sochi Olympics.

Playing on a line with Canadian greats Hayley Wickenheiser and Meghan Agosta, Spooner scored the first two goals in Canada’s 3-1 semifinal win against Switzerland en route to claiming Olympic gold. Spooner then returned to the Furies, where she led the team in scoring in the playoffs and helped Toronto lift the Clarkson Cup, becoming the first woman to win Olympic gold and the Clarkson Cup in the same year.

She went on to experience more success with the Furies. She was named team captain in 2016 and was twice a finalist for CWHL MVP. She led Toronto in scoring for the final three seasons before the league ceased operations in 2019.

Spooner took that leadership experience to the 2018 Olympics in PyeongChang. Although she didn’t wear a letter on her jersey, she embraced her role as a veteran.

“I want to be an impact player and contribute,” she told hockeycanada.ca. “I know what to expect now, and I can help the younger girls who are going into their first time – help them feel comfortable and play their best.”

Spooner wouldn’t have the impact she had hoped for on the scoresheet at PyeongChang, finishing with two assists and failing to score in her shootout attempt in the gold-medal game, which the Americans would win 3-2.

Although Spooner would rebound on an individual level at the 2019 women’s worlds, leading the team in scoring with six goals and 10 points, Canada would take home bronze after being upset by Finland in the semifinal.

After the CWHL folded in 2019, Spooner joined the PWHPA with the goal of forming a viable women’s professional hockey league in North America.  She currently plays for Team Sonnet in the Toronto region and picked up three points in five games at this year’s Dream Gap Tour in Calgary.

Spooner has also been active outside of hockey. She competed in the second season of The Amazing Race Canada, partnering with her Canadian teammate Meaghan Mikkelson. The pair would win seven of the 11 legs of the race but would ultimately finish second. Spooner was also a runner-up with partner Andrew Poje in the fifth season of CBC’s Battle of the Blades.

She is an ambassador for charities Fast and Female, which helps girls stay active in sports, and Canadian Blind Hockey, which is dedicated to supporting youth who are blind or partially sighted.