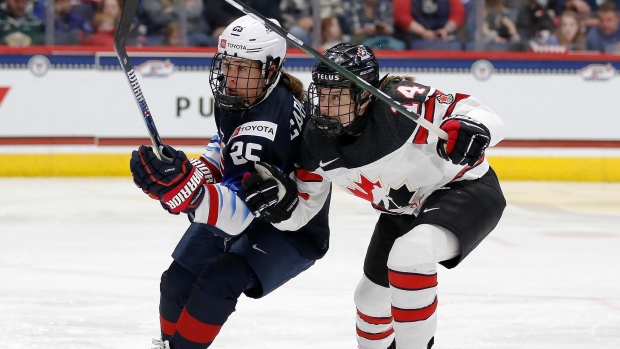 Growing up as a multi-sport athlete in Burlington, Ont., Renata Fast wasn’t sure which sport she wanted to pursue. She had two athletic scholarships offered to her out of high school: one for soccer, one for hockey. She had been MVP for both teams at M.M. Robinson High School.

Fast landed on hockey and set her sights on representing her country, which she would accomplish a few short years later.

Fast played for the Burlington Barracudas at various levels from 2003 to 2012. She was named Female Athlete of the Year in the Burlington Junior programs from 2006 to 2011, won a gold medal with the team at the Ontario Women’s Hockey Association provincials (Peewee AA) in 2007, and took home the 2012 Junior Women’s Hockey League Challenge Cup with the Intermediate AA Barracudas.

She started her collegiate career at Clarkson University in 2012 and was named to the ECAC Hockey All-Academic team in all four years of her tenure.

Fast helped Clarkson win the NCAA championship in her sophomore season, knocking off the top-seeded Minnesota Golden Gophers. It was the first national title for Clarkson in any sport in the history of the school, which was founded in 1896 in Potsdam, N.Y. Fast was named to the Frozen Four All-Tournament team.

“Potsdam is a really, really small little town and the whole town has gathered behind us,” she told the Hamilton Spectator. “When we came home they had a big fire truck bring us in and a huge parade. And so many locals came by. It’s so cool this year — all of us are on Cloud Nine.”

Clarkson was unable to repeat as champions, but Fast continued to enjoy individual success. In her final two seasons with the Golden Knights, she was named an alternate captain, and in her junior year, she was named to the ECAC First All-Star team.

In her last season, she was the recipient of Clarkson’s Booster Club’s Unsung Hero Award, which is given to the player who “always puts the team first and serves as an excellent role model to her teammates and the community.”

Fast never played for Canada’s under-18 team, instead making her international debut with the Canadian women’s development team in 2014. A year later, she won gold with the squad at the 2015 Nations Cup.

She made her first appearance for Canada’s senior team at the 2015 Four Nations Cup, winning silver. Just under two years later, Fast made her women’s worlds debut at the 2017 IIHF Women’s World Championship, where Canada took home silver again.

A year later, she was able to realize a childhood dream after she was named to the roster for the 2018 Olympics. Although Canada would fall to the United States in a shootout in the gold-medal game, Fast would finish with a plus-4 rating in the tournament.

After her collegiate career, Fast was selected second overall by the Toronto Furies in the 2016 CWHL Draft. In her inaugural season, she led all Toronto defencemen in scoring and was a finalist for CWHL Rookie of the Year. She finished her career with the Furies as a two-time all-star before the league ceased operations in 2019.

At her second women’s worlds in 2019, Fast finished tied for second-most assists in the tournament with six, and her plus-8 rating was the second best for Canada. Unfortunately, it was a disappointing finish for the team, who were upset by Finland in the semifinals and ended up with bronze.

But there was a bright spot for Fast in 2019. She was one of four women chosen to take part in the NHL All-Stars Skills competition, along with Canadian teammate Rebecca Johnston, and Americans Kendall Coyne Schofield and Brianna Decker.

The four players got to decide amongst themselves who would compete in each event. Fast originally wanted to take part in the fastest skater competition, but that went to Coyne Schofield, who made headlines across North America with her time of 14.346.

Fast ended up competing in accuracy shooting. She told the Hamilton Spectator that when she practised, she was able to hit every target, but she didn’t perform quite as well at the actual event.

At the 2020 NHL Skills Competition, Fast was one of four defencemen to take part in the Elite Women’s 3-on-3 game.

After the CWHL folded in 2019, Fast joined the PWHPA, which was formed in an effort to start a viable pro women’s hockey league in North America. Fast currently trains with Team Sonnet in Toronto.

“As female athletes, we’ve had to deal with negativity for a long time,” Fast told the Gist, a women-focused sports news outlet. “We don’t even really pay attention to it anymore. When you’re pushing for growth, there will always be people not on board, and trying to pull you down.”