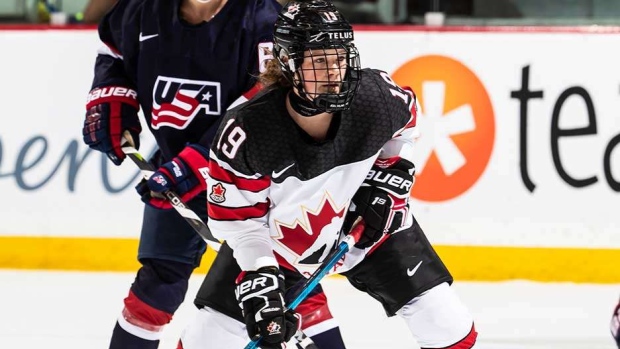 When a player makes her debut with the Canadian women’s hockey team as an 18-year-old, people are going to take notice. Sarah Fillier did exactly that in 2018, and she has marked herself as the future of Canadian hockey.

Fillier was a multi-sport athlete growing up in Georgetown, Ont., taking part in badminton, basketball, flag football, ultimate frisbee and track and field. With hockey, she played for the North Halton Twisters and Halton Hurricanes Boys AA before joining the Oakville Jr. Hornets in the Provincial Women’s Hockey League (PWHL).

In her first season with Oakville in 2015-16, Fillier had 11 points in 22 games and won silver at the Ontario Women’s Hockey Association (OWHA) provincials. She really started to turn heads the following season, recording 24 goals and 50 points in 34 games. She also finished with 11 points in 12 playoff games, helping the Hornets win the PWHL Championship and OWHA provincials.

Fillier was named Oakville’s captain for the 2017-18 season. While the Hornets were unable to defend their titles in both the PWHL Championship and OWHA provincials, taking home silver in both competitions, Fillier led the PWHL playoffs in scoring with 12 points in 10 games, and she earned MVP honours at the OWHA provincials.

She also picked up two gold medals while playing for Ontario Red, taking home the top prize in 2016 and 2017 at the National Women’s Under-18 Championship. Fillier finished with a combined eight goals in the two tournaments and was also named MVP in 2017.

At 16, FIllier made her debut with Canada’s under-18 team and won silver with the squad at the 2017 IIHF U18 Women’s World Championship. One year later, she captained the team to bronze at the tournament, finishing with five points in six games.

In 2018, Fillier burst onto the NCAA scene with Princeton after committing to the team in Grade 10. As a rookie, she led the team in scoring, led the NCAA in both rookie scoring and points per game (1.97), and helped the Tigers to an Ivy League championship. She took home many awards that season, including national Rookie of the Year (becoming the first-ever ECAC player to win the honour), Ivy League Player of the Year, NCAA Second Team All-American, and she was a top-10 finalist for the Patty Kazmaier Award, given annually to the top collegiate women’s hockey player.

FIllier made her debut with the Canadian senior team as an 18-year-old – the only collegiate freshman on the squad – at the 2018 Four Nations Cup. Playing on a line with Natalie Spooner and Sarah Nurse, Filler netted her first goal in a 6-1 win over Sweden in the preliminary round, becoming the first player born in 2000 to score for the national team.

“The first 2000-born player, I take a lot of pride in that,” she told the Canadian Press. “I want to prove myself at this level and not just be here because they want me to get the experience. I want to make a difference at this level.”

Fillier also spent time with Canada’s development team and she featured in the two-game exhibition series against the United States in the fall of 2019, scoring her second-ever goal with the senior team in a 4-1 win for Canada.

In her sophomore year at Princeton, Fillier picked up where she left off. Serving as team captain, she finished eighth in NCAA scoring with 57 points and ranked second in the nation in points per game (1.84). She was once again named a top-10 finalist for the Patty Kazmaier Award and a Second Team All-American.

Filler was especially impressive in the ECAC playoffs, as Princeton won its first-ever conference championship. In the Tigers’ quarter-final series against Quinnipiac, Fillier scored the series-clinching goal in double overtime. She finished with four goals and nine points and also earned Most Outstanding Player honours.

“Sarah is one of the best 200-foot players in North America,” Princeton head coach Cara Morey said. “She sees the game at an elite level and is often one step ahead of her opponents. She contributes in all areas of the game. She can shut down opponents defensively and can also contribute offensively on the scoreboard.”

Princeton qualified for the NCAA Championship in 2020, but the tournament was cancelled due to COVID-19. The Tigers also had their 2020-21 season cancelled after the Ivy League suspended all winter sports.

Fillier has seen little time on the ice since the premature end of her 2019-20 collegiate season. She was set to make her women’s worlds debut at the 2020 tournament, but that was also cancelled because of the pandemic.