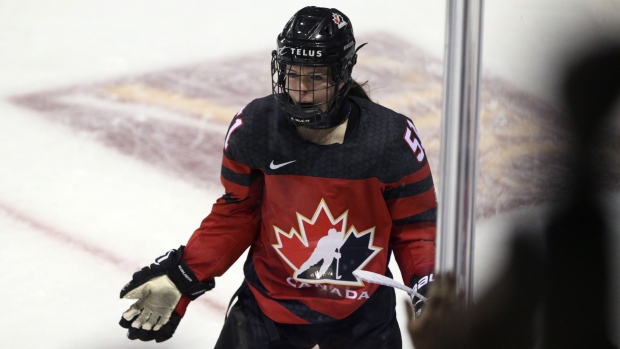 A year after being denied the opportunity to make her women’s worlds debut because of COVID-19, Victoria Bach is ready to introduce herself at this year’s IIHF Women’s World Championship.

Hockey wasn’t always Bach’s choice of sports. She started out as an avid soccer player, but the 2002 Olympics in Salt Lake City changed her mind and her focus.

“They really inspired me,” she told The Athletic. “I wanted to be just like them.”

Bach played for two seasons with the Oakville Jr. Hornets before joining the Mississauga Jr Chiefs. In the 2013-14 season, she led the Provincial Women’s Hockey League (PWHL) in goals and points and helped Mississauga earn gold at the Ontario Women’s Hockey Association (OWHA) provincials  She and the Chiefs also won silver at the PWHL Final Four.

Bach played for four years at Boston University, where she became a standout in the NCAA. She holds several school records, including all-time goals (104), all-time points (198), most goals in a single season (39), and most points in a season (67). She is the first woman in program history to reach the 100-goal mark (Marie-Philip Poulin scored 81 during her tenure with the Terriers), and she was a top-three finalist for the 2018 Patty Kazmaier Award, given to the top collegiate player in women’s hockey.

Bach, who is listed as 5-foot-4 and 124 pounds, told The Athletic that she had plenty of incentive during her NCAA career.

“Growing up a lot of people told me, ‘I don’t think you’re going to make it anywhere in hockey. You’re too small. You’re not going to adjust to the NCAA level,’” she said. “I always used that as motivation to prove people wrong.”

While Bach was playing for Boston, she also spent time with Canada’s development team, winning consecutive gold medals with the squad in 2015 and 2016 at the Nations Cup. She made her debut with the senior team at the 2018 Four Nations Cup, winning silver. She was initially cut from the roster before being called up due to an injury.

That same year, Bach was also selected third overall by the Markham Thunder in the CWHL draft. In her rookie season, she led the team in scoring, played in the CWHL All-Star Game and was named CWHL Rookie of the Year. This would be her lone season with the team, as the CWHL folded in 2019.

Bach was not named to the roster for the 2019 IIHF Women’s World Championship, and with the 2019 Four Nations Cup cancelled, she was left with limited international experience. She did feature in seven games against the Americans from late 2019 to 2020, scoring her first two goals for the senior team in a 4-1 win against the United States on Nov. 9, 2019. She followed that up with two more goals and an assist in the Rivalry Series, including the overtime winner in Canada’s lone victory of the series on Feb. 4, 2020.

Bach was named to the roster for the 2020 IIHF Women’s World Championship, but the tournament was cancelled due to COVID-19. Bach was one of three Canadian players who was set to make her women’s worlds debut, along with Claire Thompson and Sarah Fillier.

When the CWHL ceased operations in 2019, Bach joined her Canadian teammates in the PWHPA, which was formed in an effort to create a viable professional women’s hockey league in North America. Bach appeared in four Dream Gap Tour showcases, including both Toronto stops.

She currently plays for Team Sonnet in the Toronto region. At this year’s Dream Gap Tour in Calgary, Bach recorded two goals and four assists in five games.