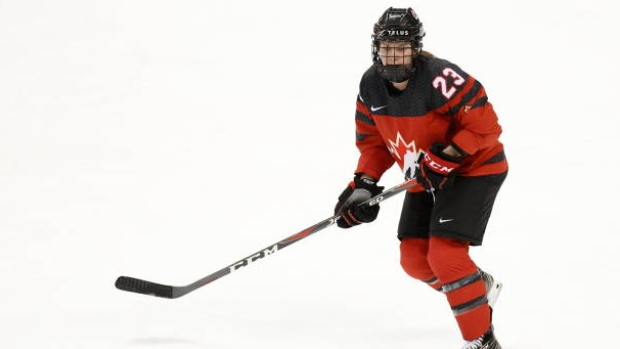 In the sports world, mental health has increasingly become a bigger priority for athletes.

From tennis star Naomi Osaka pulling out of the French Open and Wimbledon this year to Olympic gold medallist Simone Biles sitting out multiple events in Tokyo, it has garnered a lot of discussion about the well-being of athletes.

And for the Canadian national women’s hockey team, mental health has been at the forefront. The COVID-19 pandemic has been challenging on women’s hockey, cancelling the IIHF Women’s World Championship last year and postponing it twice in 2021.

Aside from NCAA talents Ashton Bell and Emma Maltais, Team Canada’s players have barely played any games since March of 2020.

With the exception of the Secret Cup, where the Calgary, Toronto and Montreal chapters of the Professional Women’s Hockey Players Association faced off in a week-long tournament in May, playing time has been scarce for Team Canada.

Preparing for the upcoming Women’s World Championship on Aug. 20 has been a welcome reprieve for the players, as they look for Canada’s first gold medal at the Women’s Worlds since 2012. They have gathered only for a handful of camps since the pandemic began.

“It’s been a long 16, 17 months or however months we’ve been waiting for this and I think all of us are just really excited to be a team again,” said Canadian forward Jamie Lee Rattray.

“We know we’re going to be a team for the rest of the year and I think it’s really, really exciting and I’ve just had a blast with the girls even just at meal times and things like that. It just feels so good to be together.”

When it came to training during the pandemic, provincial restrictions were factored in as national team members were able to skate together with safety protocols in place. On the PWHPA side, while the Toronto and Calgary hubs were unable to train together, the Montreal team practised and trained together at Centre 21.02 in the Verdun Auditorium in Montreal.

Rattray (Toronto), defenceman Erin Ambrose (Montreal) and goaltender Kristen Campbell (Calgary) all had different experiences the past year and a half.

Rattray, who was a part of the Canadian squad that took home bronze at the 2019 Women’s Worlds, says that the lack of games gave her time to hone in on skill development.

“I think for me personally I was really fortunate where we were in Toronto, we kind of had our own little hub of training and I think that really kept me going,” she explained.

“Sometimes when you’re in a real season, you don’t get a ton of time to kind of work on your own game and that’s kind of what the summer is meant to be.

“I think actually in terms of the skill side of it, I feel I’ve actually gotten better in terms of that side, my skills, I’ve been to focus in on some parts of my game that I maybe haven’t been to in the past couple of years.”

Ambrose, a member of the 2019 bronze-medal winning team who trained with the PWHPA Montreal team throughout the pandemic, opened up about her struggles with anxiety and depression in an open letter last fall and admits it was hard dealing with the isolation that COVID brought.

“For me it was a little bit of a tough year,” she said. “Obviously a lot of isolation with the camps and everything that we did have. Which was great, we needed that safety and those safety measures put in place. The isolation was very tough on me for my mental health.

“I’ve leaned a lot on teammates and different resources, reached out and worked with some different counsellors and such and I know that’s something I need to continue to do because COVID obviously isn’t gone yet and some of our safety measures are still in place. I know that I need to continue to do that in order to not just be at a high performance level, but also just be at a stable level myself with my mental health.”

While the players still stay in separate rooms and follow safety protocols in their bubble, unlike previous camps, they are now able to eat meals as a group and physically spend more time together.

Ambrose notes that being back with the team has had a positive impact on her mental health.

“Being able to be in groups for food and everything, it’s just a little bit more normalcy that we haven’t had in a very long time,” she said.

“You look back at the camps that we had, when we’d get on the ice we had so much excitement but then we kind of get back in our rooms and be cooped up again. So really just getting [to be] with each other and just spend time and talk to each other has just been so nice.”

Campbell, named one of the three goaltenders for the Women’s Worlds and Olympic centralization, spent the pandemic training in Calgary, which included a lot of one-on-one time with Canada’s goalie coach Brad Kirkwood.

She also admits it was a challenging year but compared the experience to her mentality when she red-shirted during her first year at the University of North Dakota.

“It kind of reminded me a lot of that year, you were training behind the scenes, you weren’t getting in any competitive games and you were just doing everything you could on your own to kind of excel your own personal game so that when you’re back with your team, you can up the team’s collective game,” said Campbell.

Rattray and Ambrose credit the coaching staff and the team’s leadership core, comprised of captain Marie-Philip Poulin, Brianne Jenner, Blayre Turnbull, Mélodie Daoust and Jocelyne Larocque, for keeping the team connected throughout the past year and a half.

“It’s pretty awesome to have a group like that, that kind of thinks of the bigger picture not just the narrow focus,” Rattray said. “They’ve done a really good job of thinking of what the team needs and also different opinions from different ways too.”

“I think we’ve built a great foundation with this group throughout the last couple years and making sure that we’re connecting more as individuals and not just as hockey players,” said Ambrose.

“We care about each other as individuals and know that obviously mental health is a very important aspect and we need to make sure that is something that continues to be important for us.”