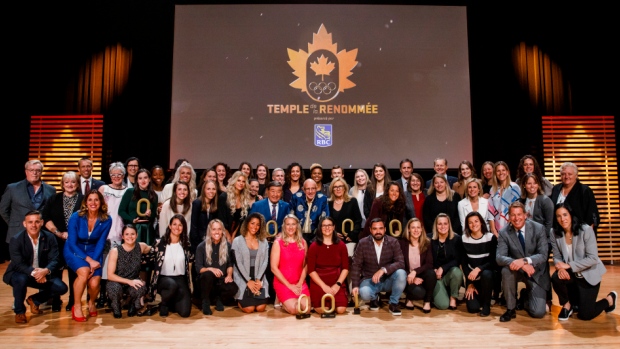 The women’s Vancouver 2010 hockey team won gold on home ice in at Vancouver 2010 to earn Canada its third consecutive hockey gold medal, conceding only two goals over the duration of the five game tournament. The team’s gold medal game victory (2-0) is the only time in women’s Olympic hockey history Team Canada has shut out Team USA.

"Winning a gold medal on home soil is something that few athletes get a chance to do and it’s not easy," said team member Hayley Wickenheiser. "Vancouver 2010 was a special Olympics for all of us. Our team rose to the challenge of playing under the pressure of competing at home. We felt like there were seven players on the ice at all times, the seventh was the Canadian crowd and all the fans cheering us on to gold."

Despatie is the first Canadian man ever to win an Olympic medal in diving. Girard is Canada’s first Olympic champion in the sport and the first Canadian woman to win an Olympic medal in weightlifting. Her bronze medal (Beijing 2008) and gold medal (London 2012) were awarded several years after the Games when athletes who had initially placed ahead of her were disqualified for doping.

The women’s London 2012 soccer team overcame a disappointing result at the 2011 World Cup to qualify for the Olympics through regional competition to win a bronze, Canada’s first Summer Olympic Team sport medal since 1936. "We were a group that had spent over a decade trying to break into the world’s best, and after finishing dead last in a World Cup in 2011, and with a new coaching staff that reinvigorated our passion to change Canadian soccer for the better, we managed to do just that," said team member Diana Matheson.

Starkman (posthumously) was a highly-respected journalist with a 24-year career covering Canadian Olympians and amateur athletes.

Since 1949, the Canadian Olympic Hall of Fame has inducted 429 athletes, teams, coaches, and builders in recognition of their outstanding Olympic achievements and their embodiment of the Olympic values.