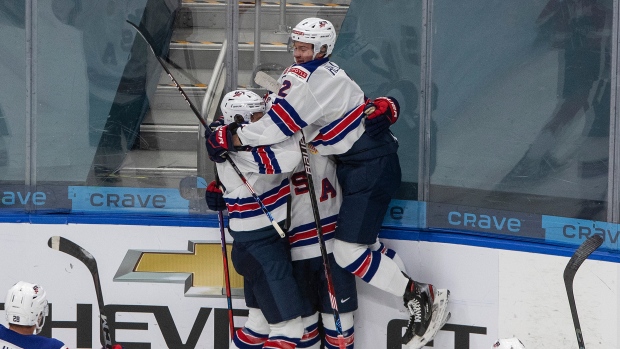 It all comes down to this as Team Canada takes on Team United States for the gold medal at the 2021 IIHF World Juniors. Follow all the action right here at the TSN.ca World Juniors live blog.

Team Canada looks to complete a remarkable journey at the 2021 IIHF World Juniors as they take on Team USA in the gold medal game.

Canada has not trailed at any point in the tournament and outscored their opponents 41-4. If they can pull off a win tonight, they would win back-to-back gold medals for the first time since winning five straight from 2005-09.

Canada had convincing wins in the knockout stages against Team Czech Republic and Team Russia.

Team USA had a competitive Group 'B' to contend, They defeated Team Slovakia and Team Finland to get here. They've also won the last four finals against Canada at the World Jr's (2004, 2010, 2017).

The pace of play is fairly in the early going. USA has recorded the first couple of shots on goal.

Canada has responded with a couple of chances on USA goalie Spencer Knight. Thomas Harley and Bowen Byram get shots from in close. Scoreless game 6:12 into the game.

The Canadians are peppering Knight with shots. The American goaltender has handled them well. After seven straight shots from the Canadians, Cam York takes a shot from the point but Canadian goalie Devon Levi makes a glove save.

The Americans have pressured the Canadians for the last few minutes and make them pay. Alex Turcotte deflects a shot from the point by Drew Helleson and into the net. Trevor Zegras picks up the second assist at 13:25.

Turcotte tips it into the top corner #WorldJuniors pic.twitter.com/V4r2cSbiWA

At the moment, Zegras overtakes Dylan Cozens for the tournament lead in points with 17 (six goals, 11 assists).

It's the first even-strength goal that Team Canada has given up in the tournament. It is also the first time Canada has trailed at any point.

Canada goes to the power play as Bobby Brink takes a tripping call at 16:38.

Team USA kill it off. Quinton Byfield with an excellent opportunity as time expires. He flipped a centring pass in front of the net over the net and into the stands.

First period in the books. USA outshooting Canada 13-9 after 20 minutes.

Second period now underway and disaster strikes for the Canadians. A couple of turnovers in their own zone leads to a goal. Arthru Kaliyev takes the puck and shoots it towards the back of the net. Levi goes the other way as the puck takes an odd bounce. Zegras picks it up and puts it into a partially empty-net for a 2-0 lead.

Zegras with with a tournament-leading 18 points.

Canada takes their first penalty. Jakob Pelletier goes off for hooking at 10:03.

*PING*, In a 3-on-2 chance for Canada while shorthanded, Bowen Byram takes a feed from Jack Quinn. He beats Knight, but hits the post.

The missed opportunity seems to have give Canada a bit of a spark but their bad puck luck remains. Byfield with an opportunity that narrowly misses the net.

Braden Schneider had a chance in close for Canada, but Knight manages to wait out the shot and get a piece of his glove on the shot attempt.

Second period in the books. After a strong start by USA, Canada picked up their game in the second half of the period. But Canada trails 2-0. Shots favour Canada 10-7 in the middle frame.

Canada with pressure as Kaiden Guhle tries to get a shot through from the point but it is blocked.

Canada with a flurry of activity late. Byram again with a good chance but the puck gets smothered under Knight.