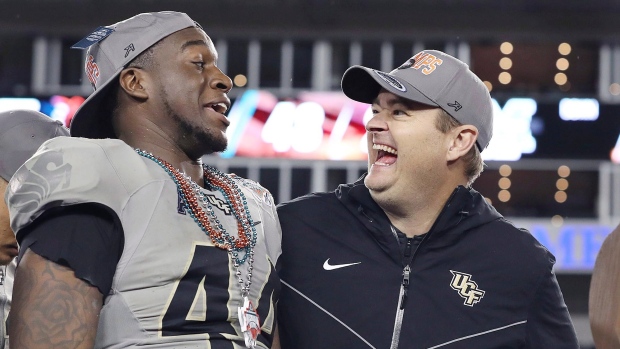 The Vols have found their man.

"I am thrilled to be coming to Tennessee," Heupel said in a statement. "I understand that Volunteer fans are hungry for a return to the top that they so richly deserve, and it is my goal and commitment to bring a championship back to Rocky Top."

Heupel, 42, had spent the past three seasons at Central Florida following Scott Frost's departure to Nebraska.

In three seasons, the Knights had 28-8 record under Heupel including an undefeated regular season in 2018.

A former star quarterback at Oklahoma and the runner-up for the 2000 Heisman Trophy, Heupel coached at Oklahoma, Arizona, Utah State and Mizzou before taking the UCF job, his first head coaching gig.

Heupel joins a Vols program that has struggled mightily in recent years, failing to reach double-digit wins since Phil Fulmer's retirement in 2007.

Pruitt was fired after three seasons earlier this month after an internal investigation revealed NCAA violations under his watch. Fulmer, who became the school's athletic director following his retirement from the football team, also stepped down.