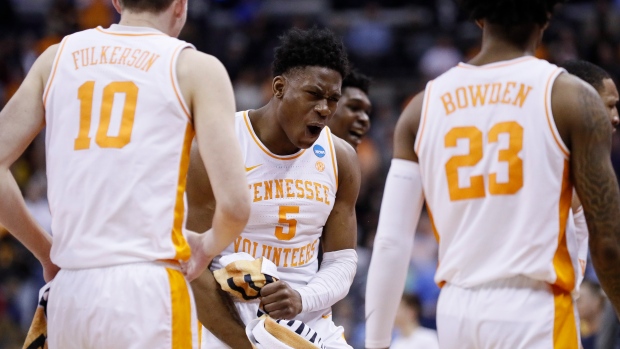 COLUMBUS, Ohio -- Tennessee avoided one of the biggest meltdowns in NCAA Tournament history Sunday, letting a 25-point lead slip away before two-time SEC player of the year Grant Williams scored 6 points in overtime for an 83-77 victory over Iowa.

The Volunteers (31-5) made it back to the Sweet 16 for the first time since 2016, though there were more tense moments than the Vols imagined after they ran off to a 44-19 lead in the opening half.

The biggest NCAA Tournament comeback? BYU's 25-point rally past Iona in the First Four in 2012.

Tenth-seeded Iowa (23-12) nearly pulled off another one, sending it overtime tied at 71 -- the first overtime game in this year's tournament.

Williams had a pair of free throws, two jumpers, and a strip in overtime that helped the Vols pull it out and match their school record for wins in a season. He finished with 19 points and seven rebounds. Admiral Schofield scored 17 of his 19 in the Vols' blistering first half.

Jordan Bohannon scored 18 for Iowa, which never led but managed to tie it twice after falling so far behind.

Last year, the Volunteers lost to Loyola-Chicago in the second round. They followed it with a record season -- ranked No. 1 for four weeks, a school-record 19-game winning streak, a full season in the Top 10 -- and had just enough in overtime Sunday to keep it going.

Iowa: The Hawkeyes wrapped up a turnaround season. They improved their win total by nine games and were second in the Big Ten in scoring in coach Fran McCaffrey's ninth season. They were prone to give up a lot of points and lost three games by at least 20. The Vols fully exploited their defensive shortcomings.