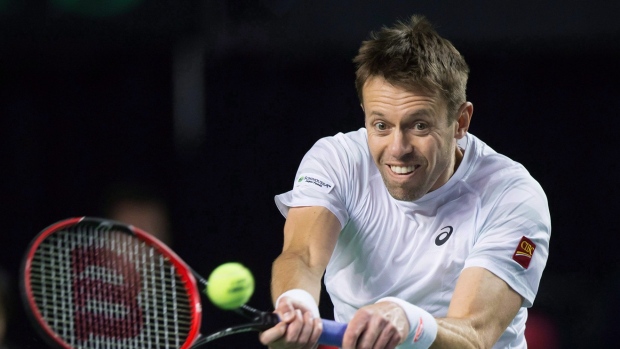 After winning virtually every significant tennis title imaginable, the finish line is in sight for Daniel Nestor.

The Canadian doubles star said he is planning to retire next summer, either after the Rogers Cup in his hometown of Toronto or after the U.S. Open in New York. He divulged his plans in an interview with Sportsnet ahead of this week's Davis Cup tie between Canada and India at Edmonton's Northlands Coliseum.

Nestor, who has had 10 different stints as the world's top-ranked doubles player, is third on the Open era list with 91 doubles titles.

Now 45, he has struggled this year playing with a variety of partners and has dropped to No. 43 in the rankings. He entered the season having won at least one doubles title in each of the last 23 years.

"His time has come but he'll always be remembered as a Canadian icon in the tennis world," said longtime Rogers Cup tournament director Karl Hale.

Nestor turned pro in 1991 and made a name for himself the following year when he stunned top-ranked Stefan Edberg in a five-set Davis Cup thriller in Vancouver.

The left-hander played singles and doubles in his early days, but quickly emerged as a force in the four-man game with Mark Knowles of the Bahamas. They picked up their first title as a duo in 1994 at Bogota and reached the Australian Open final in 1995.

In 2000, Nestor won Olympic gold with Sebastien Lareau at the Sydney Games. It was the second of six consecutive Olympic appearances.

"His serve was a big strength," Lareau said from Montreal. "His ball moved a lot, it had a nice kick. His variations were really good. He would always either jam you or go wide. He was mixing it a lot.

"You never felt pressure playing with Daniel. He never put any pressure on you so you always felt comfortable to go out and do your thing."

Nestor and Knowles, meanwhile, were dominant through the early 2000s, winning six titles together in 2002 and again in 2003.

Nestor started playing full-time with Serbia's Nenad Zimonjic in 2008 and they got immediate results, winning five of eight finals. Nestor also completed a career Grand Slam by winning at Wimbledon for the first time.

He became the first Canadian to earn US$1 million in a season the following year by winning nine more titles with Zimonjic.

Max Mirnyi of Belarus came on board as a full-time partner in 2011. They won the French Open together and were victorious at the season-ending World Tour Finals.

In 2013, Nestor began playing with a variety of partners. Over the last few seasons he has teamed with Edouard Roger-Vasselin of France and India's Rohan Bopanna, among others.

"It tells you about his will to still be out there competing every day," Lareau said. "Battling through injuries, being away from home, family and friends, it shows his love for the game and his love for competition."

It wasn't immediately clear when Nestor would be available to further discuss his playing future. Nestor might not conduct interviews until after this week's competition, a Tennis Canada spokeswoman said in an email.

Players from the Canadian and Indian teams were scheduled to take media questions Thursday at the official draw at Edmonton City Hall. A text message left with Nestor was not immediately returned.

Nestor will be playing his 51st career Davis Cup tie this week.