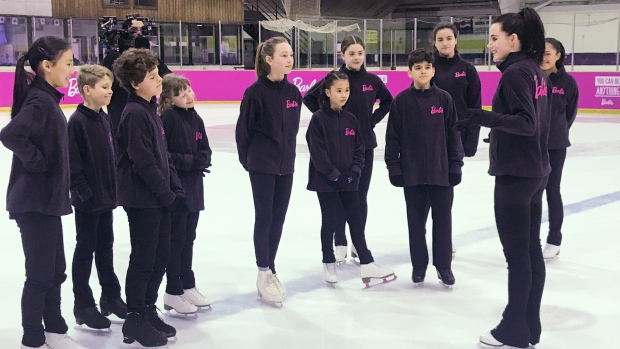 Virtue was honoured as a Barbie “Shero” and named the Canadian ambassador for the Dream Gap Project in March 2019. Through the project, Virtue, along with 20 female role models from 18 countries across the world, is looking to address the self-confidence and self-esteem challenges girls are developing at a young age. Other female role models who are a part of the program include Paralympics swimmer Sümeyye Boyaci, wildlife conservationist Bindi Irwin, and NASA mathematician and physicist Katherine Johnson.

“As soon as I sat down with the team at Barbie and really fully grasped their mission statement, I knew that it was a great fit,” Virtue told TSN.ca on Monday. “They’re doing so much to change the narrative and continue that really important conversation about girls and the way that they view themselves and their sense of self-worth and confidence; this idea that you can be anything.”

As a part of Virtue’s Barbie doll launch, she went to the McCormick Arena in Toronto, Ont. to surprise the next generation of skaters. Since becoming the most decorated figure skater in Olympic history after the 2018 PyeongChang Winter Games, alongside her partner Scott Moir, Virtue has become an influential figure to many young skaters across the country.

Virtue says that her biggest goal in collaborating with Barbie is to use her platform to empower them.

“I just hope that amidst all the pressure and stress that’s facing kids today, that they feel competent and confident,” Virtue said during a Q&A at the event. “Everyone gets nervous, everyone gets scared, everyone feels sometimes like they’re not good enough and sometimes we need those reminders that we are – that we’re worthy.”

The Dream Gap Project raises money from their dolls to support organizations that empower young girls. Last March, the initiative raised $250,000 for She’s the First, She Should Run, and Step Up – organizations that help young girls build their confidence, develop their leadership skills, and prepare them for success in their post-secondary education and careers.

“It’s amazing how we tend to limit ourselves and kind of diminish our self-worth,” said Virtue. “At five years old, girls show that they doubt their capabilities and boys don’t, and already they’re feeling the pressures of trying to be the way that culture tells us to act, look, behave, and dress. We’re trying to fit ourselves into this little box and I think it’s important to shatter that notion that we have to be a certain way to be accepted, to be loved, and to be valued.”

Now retired from competitive skating, Virtue says she will continue to align herself with brands and initiatives like the Barbie Dream Gap Project and use her platform to empower young girls and women. She adds that she especially wants her youngest fans to know that they can achieve their dreams, and that with hard work and passion, “nothing is out of reach for you."

“I’m conscious of how young kids, both boys and girls, perceive success because what you see is a lot of podiums and sequins and smiles, and there’s so much behind that. It’s important for them to get a glimpse of what really goes into achieving a goal and that they can do anything.”

Virtue’s doll wears the dress that she wore in her gold medal free dance performance at the 2018 Winter Olympic Games. The doll is now available exclusively at Toys R Us, Canada-wide.