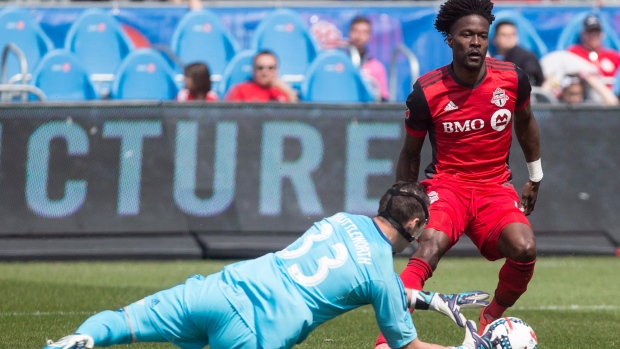 Toronto FC picked up the options on seven players on Tuesday, but Tosaint Ricketts and Clint Irwin were not among them.

The Canada international striker and veteran goalkeeper had their options declined. Forward Jordan Hamilton and defender Jason Hernandez are both out of contract at year's end with Hernandez eligible for free agency.

In addition to the options, the loan deals for defender Auro Jr. and forward Lucas Janson expired, sending the players back to Sao Paulo and Tigre respectively. The contract of midfielder Ager Aketxe was terminated by mutual consent.

"We are happy to bring back a high number of players that have contributed to our club over the past couple seasons as we continue to shape our roster ahead of the 2019 MLS season and Concacaf Champions League," general manager Tim Bezbatchenko said in a statement. "We will continue to have discussions with the players on loan and whose options were not exercised and those out of contract. We want to also acknowledge Clint, Tosaint and Jason for their contributions to the club both on and off the field. They have played an instrumental part in building our club into one that competes for championships."

Ricketts, 31, signed with TFC midway through the 2016 season and scored key goals in the club's playoff run to the MLS Cup Final against New York City FC and Montreal Impact. The Edmonton native scored 17 times for the club over 68 appearances in all competitions.

Irwin, 29, was acquired ahead of the 2016 season and started much of his first year in Toronto, including their playoff run. In 2017, a hamstring injury kept the Charlotte native out of the lineup and he eventually lost the No. 1 shirt to Alex Bono.

In addition to the players whose options the club picked up, TFC has an additional 14 players under contract including Designated Players Sebastian Giovinco, Michael Bradley and Jozy Altidore.