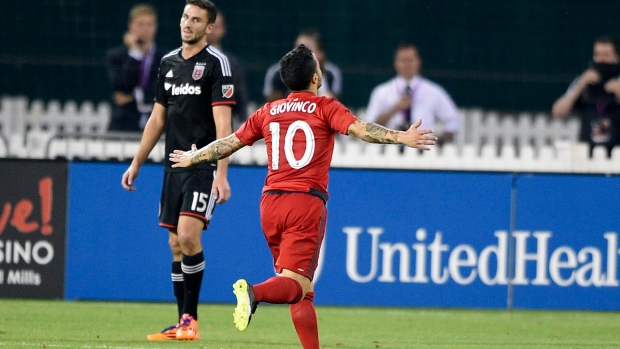 TORONTO - The eye tattooed on the back of Sebastian Giovinco's neck is there for a reason. Toronto FC's star forward really does see everything on the field.

Midway through his debut MLS season, the 28-year-old Italian is on MVP pace. And wowing his teammates.

Toronto midfielder Jonathan Osorio, on duty with the Canadian national team, watched from his hotel room Sunday as Giovinco scored the first hat trick in franchise history and terrorized the New York City FC defence in a wild 4-4 draw at Yankee Stadium.

"He's fun to watch even when you're on the field but to play with him is an honour," said Daniel Lovitz, who played fullback Sunday. "It's very special. It makes you more confident in what you're doing, knowing you have someone that's capable of putting the ball wherever he wants to and getting by whoever he needs to at any time."

The hat trick ball, encased in glass, was subsequently given to Giovinco by TFC.

Giovinco's scoring spree Sunday — he probably could have had six given he hit the post twice, once on a penalty, and sent a volley over the crossbar — raised his total to 11. Only Dwayne De Rosario, with 15 goals in 27 games in 2010, has scored more for the club in a single season.

With eight assists, the five-foot-four 135 pounder has already erased the single-season club mark of six.

The Italian ranks second in MLS in goals this season, fourth in assists, and first in both shots (98) and shots on goal (42).

He is coming off his third player of the week award and yet so far has been left of the all-star roster. The fact he was not the first player on the team sheet had Toronto players scoffing.

While Giovinco will undoubtedly be added when the squad is filled out, he was not picked in the fan vote for the starting 11 and Don Garber used his commissioner's picks on English stars Frank Lampard and Steven Gerrard.

"The goals he scores are of the highest quality ... he's just phenomenal on the ball. He brings other people in."

Toronto coach Greg Vanney has plenty of game plans. But giving the ball to Giovinco has been the simplest and most effective strategy.

Toronto would be well-served to encase the Italian in bubble wrap when he is not playing.

Giovinco is enjoying life in Canada on and off the field.

"If I went back (in time), I would make the same decision — to come here, to live in Toronto, to play for Toronto FC and in MLS," he told The Canadian Press through an interpreter.

Toronto celebrates the player known as the Atomic Ant on Saturday, handing out T-shirts to the first 10,000 fans at the game against the visiting Philadelphia Union.

The nickname — Atom Ant was a cartoon super-hero created by Hanna-Barbera in the '60s — was hung on him by Juventus fans. He likes it.

Deadly from set pieces, Giovinco can score with both feet and has great vision. He also skip around defenders and dance along the goal-line

Giovinco can play up front or behind the striker, and is almost unstoppable one on one unless a defender takes him down, which is a common occurrence.

While deceptively strong for his size, the Italian has been fouled 47 times this season — third most in the league.

"He's incredibly hard to get a hold of. He's so quick, he finds gaps. He get isolated one on one and then you're in big trouble," said Vanney, a former defender.

If opponents swarm him, he can dribble through them or find open teammates.

While the former Juventus man is reportedly earning US$7 million a season in Toronto, the package apparently comes with no drama. The player known simply as Seba is well liked by his teammates, usually has a smile on his face and makes a beeline home after practice to join his partner and two-year-old son.

He drives a nice car but it is not the flashiest in the club parking lot.

Unlike in Italy, Giovinco can go out with attracting a crowd.

"The biggest difference between here and Italy is that here you can have privacy and a private life," he said. "I can go out with my family, enjoy the weather or a restaurant or whatever without any pressure.

"And also when the fans stop me and ask me for something, it could be a picture or an autograph, they're very polite. I really like it because I can have my own life."

Teammates say the Italian doesn't shy away from pressure, noting he raised his game while fellow designated players Jozy Alttidore and Michael Bradley were away on international duty.

And despite having hit the post on a penalty kick early against New York, he had no problem with taking a second penalty, calmly slotting the ball home.

He does not shy away from the media but the requirement of having a translator on hand usually ensures he does not have to do it more than once a week. After games he is pleasant with the media but rarely gives much away.

Giovinco grew up in the Turin area and his childhood sounds very Canadian, if you substitute soccer for hockey. He talks of his father constantly driving him and his older brother to practice and back.

Soccer was serious, a childhood dream from a young age. While Giovinco signed his first pro contract with Juventus at 16, he had already spent seven or eight years in the club's youth system.

Since arriving here in Italy in February, he has yet to go back home. Family and friends have come here.

He hopes to get back there with the Italian national team at Euro 2016. Keeping scoring should help.

Asked whether he is at the top of his game, Giovinco demurs. He prefers to assess his play at the end of each season.

"Right now, everything is going well," he said. "But it's just the beginning."